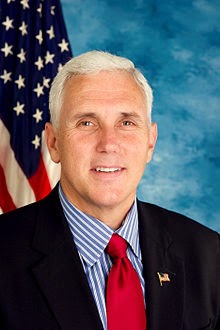 We have been seeing a lot of this face, lately. Pictured to the right is Mike Pence, the 50th Governor of the State of Indiana. Governor Pence recently signed a "religious freedom law" that many believe was prompted by bigotry against gays and lesbians. In the March 31, 2015 edition of The New York Times, The Times Editorial Board denounced the law under the title: "Religion as a Cover for Bigotry."

Right across the way, on the right hand margin of The Times' two-page editorial section, there was a contrary opinion by columnist David Brooks. Brooks' commentary was titled, "Religious Liberty And Equality." Brooks harkens back to the 1993 Religious Freedom Restoration Act, federal legislation that was supported by Ted Kennedy and signed into law by President Bill Clinton. Brooks calls the federal law "moderate" and "grounded," and claims that the law has "reduced incidents of bigotry, isolation, marginalization, and prejudice." The Indiana law is much the same as the federal law, says Brooks, so where's the problem?

In the debate between Brooks and The Times Editorial Board, neither Brooks nor the Board saw fit to cite to the First Amendment to the Constitution. The very first statement in our Bill of Rights is worth remembering, and while addressed to "Congress," this Constitutional commandment is binding on the states, too:

Whether in the federal or state version, the "religious freedom law" heralded as a great achievement by Brooks, and denounced by The Times' Editorial Board, is a legislative enactment that allows religious "belief" to trump the democratically enacted laws of our civil society.

In other words, the 1993 law and its state law counterparts is, precisely, a law "respecting an establishment of religion." All such laws are plainly unconstitutional, and in the debate with Brooks, the decision goes to The Times Editorial Board.