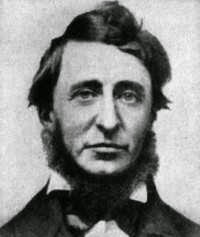 Walking is one of the lesser known works of Henry David Thoreau, who is pictured above. It is a short essay, and one worth reading. It is the source of one of Thoreau's most remembered sayings:

I recently had an occasion to remember Thoreau's assertion about wildness and the world. Four times a year I receive a print version of Desert Report in my mailbox. This is a truly spectacular publication from Sierra Club California and the Sierra Club's California/Nevada Desert Committee. The March 2015 edition of Desert Report contained an article by John Fraim, titled "Evolution Of The American Nature Symbol." If you click the link you'll be able to track it down.

Fraim's article was largely a review of Wilderness And The American Mind, by Roderick Nash. Fraim's commentary not only mentioned Thoreau, but also Emerson, Twain, Poe, T.S. Eliot, Willa Cather, Sherwood Anderson, John Dos Passos, Eugene O'Neill, and F. Scott Fitzgerald. Fraim said that "nature and culture are the great dialectical forces of the world, waging perpetual battle throughout history," with America providing a "great battlefield for the conflict." Fraim specifically cited to Thoreau, and to Thoreau's quote about wildness.

It struck me, after reading the Fraim article, that Thoreau is asserting that the World of Nature, and Wildness, is primary, and that the human world, which is the domain of "culture," is sustained by that primary, wild world.

And so I think.

Even in the years between 1851 and 1860, as Thoreau labored over different versions of Walking, Thoreau worried about the extirpation of Nature by Culture.

We had better worry some more. Our world, our "culture," the world that humans make, is absolutely and ultimately dependent on the World of Nature, the world that came before it, and that sustains it. In the "great battlefield" that is America, Culture is winning the war, and hence we ourselves prepare our doom.


And as a kind of footnote to my thought, I found this article in my morning newspaper, the day this posting appeared. Poet Patrice Vecchione recommends "walking" (the actual practice, not Thoreau's essay) as the best way to stimulate creativity. She has even written a book about it (longer than Thoreau's essay): "My whole life changed because of walking out there," Vecchione says.

Step Into Nature is the title of Vecchione's book. "The call of the wild" is the headline on the newspaper account. You can meet Patrice Vecchione at Bookshop Santa Cruz at 7:30 p.m. on Tuesday, April 7th. You can buy her book when you go to meet her, though to be totally honest, you don't have to buy the book, or even read Thoreau, to take their good advice!