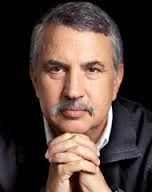 I am not at all a big fan of Thomas Friedman, pictured to the right. Friedman is a columnist for The New York Times, and despite my general skepticism about the value of his judgments and recommendations, he does, once in a while, say things that are worth thinking about.

Friedman's column on April 29th, for instance (which was largely devoted to what I think of as an ill-considered pitch for fast-tracking the proposed trade treaty called the Trans-Pacific Partnership, or TPP), also contained the following observation:

What Friedman is talking about is the accumulating evidence that our human "civilization" may be falling apart. We live, most immediately, in a "human world" that we create for ourselves, and "civilization" is, actually, a word that quite aptly designates this human-created environment. I have to agree with Friedman that an unraveling of human civilization does seem to be taking place before our eyes.

What I want to highlight in Friedman's comment, however, is his explicit recognition that what we call "civilization" is essentially constituted in a world founded upon the "rules" we make for ourselves. Human rules, unlike the "laws of Nature," which are a set of "rules" for the Natural World that cannot be modified by human beings, are directions that can be changed, and that can be broken.

Friedman likes the TPP because it would promulgate a new set of "rules" for the world at a time in which Friedman sees the current rules "disintegrating." The problem for those who don't like the TPP, of course, is that the "rules" that this trade treaty would promulgate would appear to turn over the future of human civilization to a set of giant corporations that would thus implement that "New World Order" that President H.W. George Bush called for in his State of the Union speech in 1991, and that he continued to promote as the best way forward towards world peace.

Those rules most emphatically do NOT have to mean the concession of ultimate political power to the giant corporations.

Listen to this clip of that first President Bush. He is SO confident, isn't he, that the New World Order he worked for would triumph?

Well, his apparent confidence is understandable. Those with the big bucks are (usually) on the winning side.

Not always! Not inevitably!