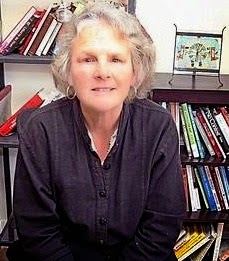 My hometown newspaper, the Santa Cruz Sentinel, frequently runs "Santa Cruz County Stories" on its first page. On Monday, April 20th, the Sentinel ran a feature story on Cecile Andrews (pictured), who is the author of Circle of Simplicity, Slow Is Beautiful, Less Is More, and (to the point of this posting) Living Room Revolution: A Handbook for Conversation, Community, and the Common Good.

Andrews posits what I'd call a "Talking Cure" for our dysfunctional democracy:

Her inspiration for her work dates back to the days of the Civil Rights movement, when as a young student she traveled to the Highlander Research and Education Center in Tennessee, the place where Rosa Parks was trained in the principles of civil disobedience. It was at Highlander where she learned that meaningful social change happened first in small groups.

“It was a life-changing thing for me,” she said. They would bring people together and just have them talk, talk, talk. No experts or authorities, no trainers. Then they would go out and get involved, after having generated their own ideas.”

She then worked in the women’s movement for many years before striking out in other arenas. An emphasis on the “voluntary simplicity” movement led to a book and “simplicity circles” of people meeting to figure out how to live a more conscious life.

These days, she’s sparking up meetings of young people and meetings of older people on the establishment of an “Elder Culture.

“John Dewey said, ‘Democracy is born in conversation,’” she said. “Both are give and take, nonviolent, collaborative, and done with respect.”

"Talking." Essential for democracy. It's what that "free speech" thing is all about.

And don't forget "Walking," either.

Walk around and meet your neighbors. Talk to them. Get together in small groups.

Result: a democratic revolution that just might pull our civilization back from the brink.