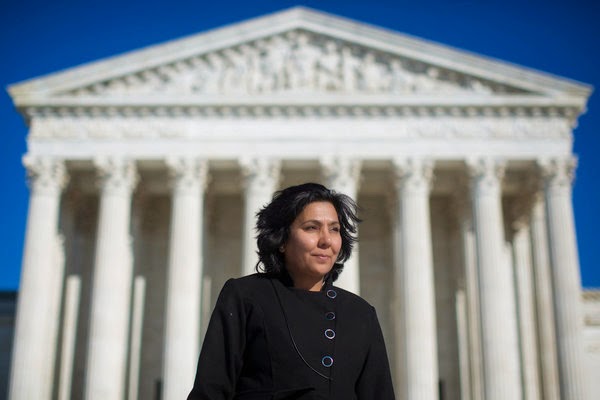 Pictured is Fauzia Din. She is a naturalized citizen of the United States, and is married to Kanishka Berashk, who is not a citizen. Mr. Berashk is in Afghanistan, and his application for a visa, to come to the United States, has been denied. Why? Because the State Department says that Mr. Berashk has been involved in terrorist activities.

If he has, that's a good reason to exclude him. But what if he hasn't? Ms. Din believes that some mistake must have been made, because she asserts that her husband is not (and never has been) a terrorist. Ms. Din has requested that the factual basis for the finding be provided to her and to her husband, so that if there is some mistake, it can be rectified.

Usually, consular decisions about visa applications are unreviewable in the courts. However, a federal appeals court in California held that when the government's decision impacts a "fundamental right," like the "right to marriage," the government must provide some "facially legitimate reason" for the visa denial.

The Supreme Court heard arguments in the case on February 23rd. You can read about the case in an article published in The New York Times on February 24th.

I think the legal issue presented is of very significant importance. If the government doesn't have to provide a "facially legitimate reason" for its actions, then it can act on a completely arbitrary basis, and no one will ever know. Not a good way to run a government, in my view.

However, I am writing this little note to illuminate another issue. According to The Times, Justice Anthony M. Kennedy said he was "uncomfortable with requiring the government to provide even minimal information," because "it might give some indication as to our intelligence-gathering capability and the information that we have." I have added emphasis to the "our" and "we."

Humbly, I suggest that the Chief Justice of the United States Supreme Court is way off base. "We the People" are emphatically NOT "the government."

The government is supposed to answer to us.