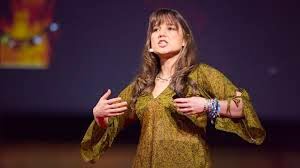 Zeynep Tufecki (pictured) calls herself a "techosociologist." That means she studies "the social impacts of technology, privacy and surveillance, inequality, research methods and complex systems." At least, that's what her faculty website says. Among other things, Tufecki teaches at the University of North Carolina, in its School of Information and Library Science. She also blogs, does Twitter, and is actively present in various guises in those "the medium is the message" kind of things.

Furthermore, this woman gives a great "TED Talk." That's where the picture comes from, and that's where I ran across her. After she gave her TED Talk (the one I really liked), Dr. Tufecki then deconstructed TED, discovering that:

The correct theorist of TED remains, of course, Émile Durkheim, a founder of sociology who has fallen out of fashion as his work seem to pertain to more mundane aspects of life, especially about organizations and division-of-labor. Durkheim was among the first to point out that what made industrialization and scaling up of society work was division of labor, which seems obvious to us as we are so steeped in it, but it is actually a major shift from previous eras. In earlier societies, we more or less all did the same things, and felt similar to one another: mechanical solidarity, as Durkheim called it. In industrial societies, we live by division of labor: everyone does their little corner of the world, and depends on each other for everything.

And that, in a nutshell, is the true theory of globalization: interdependency, and how we depend on each other, and strangers, for almost everything. Except that no longer happens in the scale of one conference, or one village, it happens at a global scale.

Dr. Tufecki's TED deconstruction was lots of fun. It has substance, to be sure (as evidenced above), but also features a discussion of Tufecki's anti-make up proclivities, Glenn Greenwald, and a couple of malfunctioning hairdryers.

But let's go back to the TED talk itself. Following the link will give you access to the video presentation, and to a transcript of what Tufecki said. That's where you will find out about that "tea without sugar" comment. Dr. Tufecki's talk was all about the use of technology to achieve political and social change, and Tufecki makes a good case that "the way technology empowers social movements can also paradoxically help weaken them."

In short, Dr. Tufecki is more or less singing in harmony with my own ideas. What's not to love about that?

Check out Dr. Tufecki's TED talk, and then remember that we need to do more than just "click" to save the world!