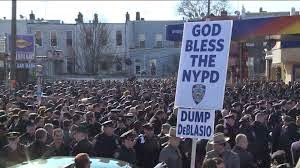 The problem of police-community relations and civil rights is not just an issue for people of color – or young people – or people who get stopped by police. This is a fundamental issue for every American who cares about justice.

All of us must work together to make this right – to work for justice – and to build the kind of city – and nation – we need to be.

Apparently, a large number of officers in the New York City Police Department didn't think that the Mayor's statement was sufficiently sympathetic to the police, and that the Mayor didn't take "their side" enough, since the Mayor failed to denounce the protesters who were taking their outrage about Garner's death to the streets. Undoubtedly, police officers were also mad about the Mayor's recent campaign, during which he argued for a change in the "stop and frisk" policies of the Police Department, which disproportionally target people of color, and which have been found to be unconstitutional. Mayor de Blasio is also reported to have said that he has told his bi-racial son to be careful in any confrontation with the police.

So, when two New York City Police officers were subsequently gunned down, execution style, by a person who was almost certainly mentally ill, and who killed himself immediately afterwards, the police demonstrated their discontent with the Mayor by dramatically turning their backs on him as he came to the hospital where the slain officers had been taken. They turned their backs on him again, a week later, when he spoke at the funeral for one of the fallen officers. The New Yorker has discussed this police behavior in an excellent article titled "No One Here Should Be Turning His Back." As it turns out, many officers turned their back on the Mayor again, at the funeral for the second officer, held just yesterday.

The New York Times had a different message:

Mayor Bill de Blasio has spent weeks expressing his respect and admiration for the New York Police Department, while calling for unity in these difficult days, but the message doesn’t seem to be sinking in.

When he spoke at a police graduation ceremony at Madison Square Garden on Monday, some in the crowd booed and heckled him. This followed the mass back-turning by scores of officers when the mayor spoke on Saturday at the funeral of Officer Rafael Ramos; the virtual back-turning the day before by an airplane-towed banner (“Our backs have turned to you”), and the original spiteful gesture by officers on the night Mr. de Blasio visited the hospital where Officer Ramos and his partner, Wenjian Liu, lay dead.

Mr. de Blasio isn’t going to say it, but somebody has to: With these acts of passive-aggressive contempt and self-pity, many New York police officers, led by their union, are squandering the department’s credibility, defacing its reputation, shredding its hard-earned respect. They have taken the most grave and solemn of civic moments — a funeral of a fallen colleague — and hijacked it for their own petty look-at-us gesture. In doing so, they also turned their backs on Mr. Ramos’s widow and her two young sons, and others in that grief-struck family.

These are disgraceful acts, which will be compounded if anyone repeats the stunt at Officer Liu’s funeral on Sunday.

The New York Police Department is going through a terrible time, and the assassinations of those officers only underscore the dreadful dangers that rank-and-file cops face every day. And, in truth, there is some thanklessness to being a cop. Officers often feel beleaguered, jerked around by supervisors and politicians, obligated to follow rules and policies that can be misguided, held responsible for their mistakes in ways that the public is not, exposed to frequent ridicule and hostility from the people they are sworn to serve. It has always been that way with cops.

But none of those grievances can justify the snarling sense of victimhood that seems to be motivating the anti-de Blasio campaign — the belief that the department is never wrong, that it never needs redirection or reform, only reverence. This is the view peddled by union officials like Patrick Lynch, the president of the Patrolmen’s Benevolent Association — that cops are an ethically impeccable force with their own priorities and codes of behavior, accountable only to themselves, and whose reflexive defiance in the face of valid criticism is somehow normal.

It’s not normal. Not for a professional class of highly trained civil servants, which New York’s Finest profess to be. The police can rightly expect, even insist upon, the respect of the public. But respect is a finite resource. It cannot be wasted. Sometimes it has to be renewed.

The failures of some cops, the misguided policing tactics that feed a sense of oppression in parts of the city, the offensive provocations of some in the police-reform protest movement, and the horrific killings of two officers, have led the city to a dangerous point.

The mayor will be meeting Tuesday with leaders of the five police unions to lower the temperature and to move the city forward. He has been doing and saying the right things, but he also seems to be taking great pains not to say anything to set off the cops. Surely many officers understand and accept his conciliatory words and realize that the things Mr. de Blasio has done — like hiring Mr. Bratton, increasing financing for the department and modernizing its equipment — are motivated by an honest desire to do right by the Police Department.

The grieving rank-and-file need to recognize this and also see the damage that many of their colleagues, and their union representatives, are doing to trash their department’s reputation.

It would be hard to say it better.

With due respect for other views, like those of Ruben Navarrette, who has pointed out, correctly, that police officers, too, have the right to protest, I think that The Times' editorial was spot on, as was its follow up editorial on December 31st.

Whatever our differences and disagreements, we should never turn our backs on another person. And that must be particularly true for the police, because the police work for the community, not the other way around.