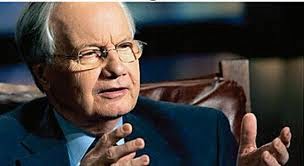 I regret that Bill Moyers is ending his television interview show, Moyers & Company, but I am happy that he will still maintain his effective website, and will be speaking out regularly on issues that matter to this nation and the world.

In an interview published on the website on January 15th, Moyers commented on the recent film, Selma, and he said something important about voting:

Back in the 1970s, in the early days of a resurging conservative movement, the late Paul Weyrich — godfather of the religious right and co-founder of the American Conservative Union, and of ALEC (the American Legislative Exchange Council, the powerful lobbying group for corporations and conservatives) – declared:

I don’t want everybody to vote. Elections are not won by a majority of people. They never have been from the beginning of the country, and they are not now. As a matter of fact our leverage in the elections quite candidly goes up as the voting populace goes down.

I thought I should probably draw attention to these remarks as a kind of antidote to the comments I recently made about voting - saying that voting is necessary but not sufficient.

What I said is true, but it is also true that if all those persons eligible to vote actually did vote, the results of our elections would be quite different, and our democracy would better represent the ordinary people of this country. Where voting is concerned, more participation must be our ambition. More people voting is always better than fewer people voting, except, as Moyer's quotation above makes clear, unless your political objective is to advance the corporate interests that seek to turn our democracy into a political lapdog for the rich and powerful.

Acknowledging that more people voting must be our aim, the way to get people to vote is by the kind of personal participation and involvement that can start with one of those "groups of five." Real politics is more than voting.

And real politics is lots of fun.

And real politics is life and death.