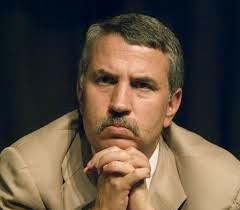 You may have heard of Thomas Friedman. He writes columns for The New York Times. He is pictured above.

Friedman was all for the United States' invasion of Iraq, as proposed and implemented by the Bush/Chaney Administration. We were supposed to take his puffed up punditry seriously, and we were supposed to believe that Friedman was well informed - better than we were, anyway - and that therefore his judgments should be accepted. Many did accept his pronouncements on Iraq. Later on, when the results started coming in, Friedman's ardent advocacy for the War in Iraq became more tempered, even critical. He seemed to forget that he had promoted the invasion in the first place. I guess that is one of the prerogatives of the pundit; these opinion leaders are supposed to be able to change their minds. But until they do, you'd better take their opinions to heart, and not question their good judgment. When they do change their minds, you're not supposed to remember what they said before.

According to Wikipedia, Friedman has won the Pulitzer Prize three times. Lots of people still take him quite seriously.

Since Iraq, I'm not one of them.

Thomas Friedman's column in the January 21st edition of The Times is titled "Say It Like It Is." The column makes White House Spokesperson Josh Earnest an object of derision, with the real object of derision, of course, actually being the President of the United States. After all (Friedman wants us to believe), Friedman is much better able than the President to see what the United States should be doing, and how it should conduct itself. Friedman's judgments are sound! He is in a position to tell the President to "Say It Like It Is."

All pundits seem to have an elevated opinion of their own greatness, but Friedman, I think, leads the pack. Here is a fairly substantial excerpt from Friedman's column. My comments follow.

When you don’t call things by their real name, you always get in trouble. And this administration, so fearful of being accused of Islamophobia, is refusing to make any link to radical Islam from the recent explosions of violence against civilians (most of them Muslims) by Boko Haram in Nigeria, by the Taliban in Pakistan, by Al Qaeda in Paris and by jihadists in Yemen and Iraq. We’ve entered the theater of the absurd.

Last week the conservative columnist Rich Lowry wrote an essay in Politico Magazine that contained quotes from White House spokesman Josh Earnest that I could not believe. I was sure they were made up. But I checked the transcript: 100 percent correct. I can’t say it better than Lowry did:

"The administration has lapsed into unselfconscious ridiculousness. Asked why the administration won’t say [after the Paris attacks] we are at war with radical Islam, Earnest on Tuesday explained the administration’s first concern ‘is accuracy. We want to describe exactly what happened. These are individuals who carried out an act of terrorism, and they later tried to justify that act of terrorism by invoking the religion of Islam and their own deviant view of it.'"

In other words, Friedman has adopted as his own the opinions of Rich Lowry, whom Friedman calls "a conservative columnist." Lowry is, in fact, the editor of The National Review, and Wikipedia says he "frequently speaks on the topics of American exceptionalism and the future of the Republican Party." For those not familiar with The National Review, it is something like the Fox News of magazine journalism. "Many of the magazine's commentators are affiliated with think-tanks such as the Heritage Foundation and American Enterprise Institute. Prominent guest authors have included Newt Gingrich, Mitt Romney, and Sarah Palin in the on-line and paper edition."

Allying himself with this "fair and balanced" commentator, Friedman faults President Obama for not being willing to say that "we are at war with radical Islam."

Let's promote another "war," and in this case we can go beyond that "war on terror" declared by former President Bush, and declare "war" on an entire religion. This takes me right back to the Thomas Friedman who advocated the Invasion of Iraq.

"War" is not really a good metaphor to guide our conduct as we seek to deal with violent extremism. For one thing, in a "war," you should expect the other side to fight back. Arguably, what happened in the offices of Charlie Hebdo might be seen as just one more battle in that existing "War on Terror" that was declared by President Bush.

Personally, I'm happy that the President isn't anxious to escalate and widen that "war" further. I think Noam Chomsky's views are more reliable than those of pundit Friedman. Check out this video interview. According to Chomsky, this nation's conduct is a major cause of the violence and terrorism  spreading everywhere, and following Friedman's advice would only make it worse.

Chomsky did NOT advocate the War in Iraq.

He's not pumping for a "War on Radical Islam," either.