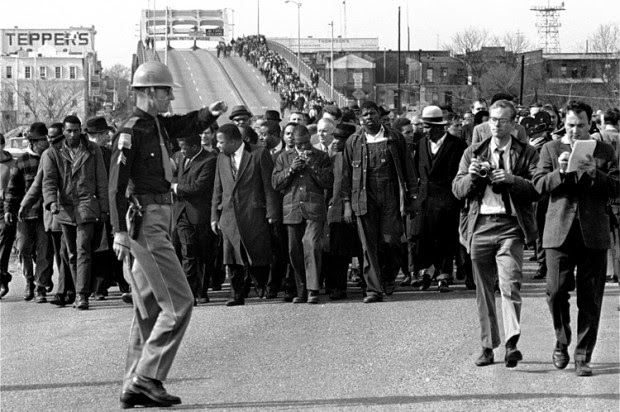 I have not yet seen Selma, the movie. There is some debate about how well the movie tracks with the truth. I have read, in particular, complaints about the movie's treatment of President Lyndon Johnson, who is apparently made into a kind of villain in the movie, at least according to some reviews.

There is no doubt about the truth of what happened in Selma, Alabama on March 7, 1965, on what has come to be called "Bloody Sunday," an event that President Johnson later compared to Lexington and Concord, calling it “a turning point in man’s unending search for freedom.”

The events of Bloody Sunday, on the Edmund Pettus Bridge, are shown, above, in a photograph from 1965. The movie version is below. 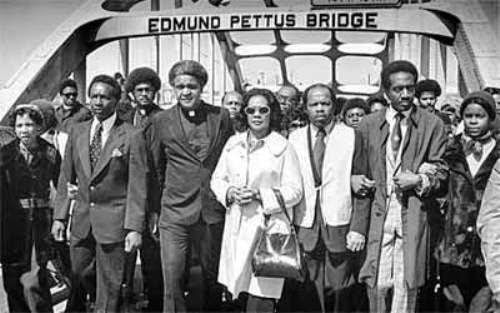 For those interested in getting at at the truth of what happened at this seminal moment in our history, I recommend a letter published in the January 19, 2015 edition of The New Yorker. The letter ran under the title "Remembering Selma," and was authored by Danny Lyon, now living in Bernalillo, New Mexico. At one time, Lyon was the college roommate of John Lewis, who is now a member of Congress, and who played a leading role in the Civil Rights Movement as one of the leaders of the S.N.C.C., the Student Nonviolent Coordinating Committee.

S.N.C.C. helped organize the Selma to Montgomery marches, and Lewis was there in Selma on "Bloody Sunday." After commenting on David Denby's review of the movie, which ran in a previous edition of The New Yorker, Lyon offers the following observation about the events of "Bloody Sunday":

The events depicted in "Selma" happened because of the incredible courage of Lewis and those who were with him when he stood on the Edmund Pettus Bridge, in a raincoat, confronting the police. Recently, I was with Representative Lewis in his office when he held up an Associated Press photograph of himself being beaten on Bloody Sunday by an Alabama state trooper. The helmeted officer is pulling Lewis toward him as he raises his baton just before crashing it down onto Lewis's head. Lewis ... was then hospitalized with a fractured skull...."


I think that Lyndon Johnson got it right when he described "Bloody Sunday" as a "turning point," and the fact that they made a movie about these events, fifty years later, is a testimony to that.

What I think we need to see is that this "turning point" in history was achieved not by violence, but by nonviolence, by the incredible courage of those who confronted physical and death dealing violence in the way that Lyon so simply and clearly describes in his New Yorker letter.

It is when we have the courage to die for our cause that we turn history in a new direction.

Killing for our cause takes no courage at all, and makes no history that we will ever want to celebrate.