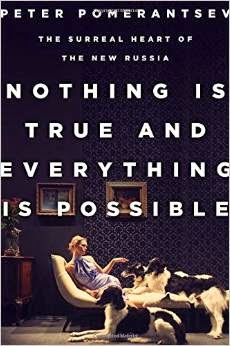 Peter Pomerantsev, a TV producer based in London, has written a book called Nothing Is True And Everything Is Possible. It's about Russia. In fact, the book is more specifically about "Putin's Surreal New Russia." That is the title of The Wall Street Journal's review of Pomerantsev's book.

I have not yet read the book (and it may be that I never will, since I am way behind on reading the books in which I have become interested because of the reviews I've read). Whatever the specifics of "Putin's New Russia," though, about which I am sure I would learn a great deal by reading Nothing Is True And Everything Is Possible, I find that the title of this book may state an important truth of a more general nature.

In fact, in the human world that we create (and that human world includes the elaborations of our politics, in Russia and elsewhere), it is absolutely correct that "Nothing Is True" in the sense that there is nothing within our human realm that is inevitably necessary. Likewise, within our human world, "Everything Is Possible."

This characterization does not apply in the Natural World, upon which our human-created world ultimately depends; in fact, quite the opposite. The Natural World is a world that is determined by laws we do not fully understand, and that we are not able to change. Something is definitely "True," even if we don't quite know the dimensions of that Truth, and the realities governed by the laws of the Natural World do not countenance any claim that "Everything Is Possible." Not so in the World of Nature. Within the world or worlds that we create, however (often denominated "human civilization"), Pomerantsev's title captures the reality of our situation.

Let me be quick to differentiate the Pomerantsev title from the seemingly similar maxim,  Nothing Is True And Everything Is Permitted. This maxim was promulgated by a different book, a novel by Vladimir Bartol, titled Alamut, which I haven't read, either. Bartol's novel has apparently been turned into a video game series called Assassin's Creed. While everything may be "possible" within the world that we create, it is emphatically not true that everything is "permitted."

The recently-released report on the tortures carried out by United States government agents, during the Bush Administration, is an obvious example of why we need to distinguish "possibility" from "permission."

End of moral lesson for today.