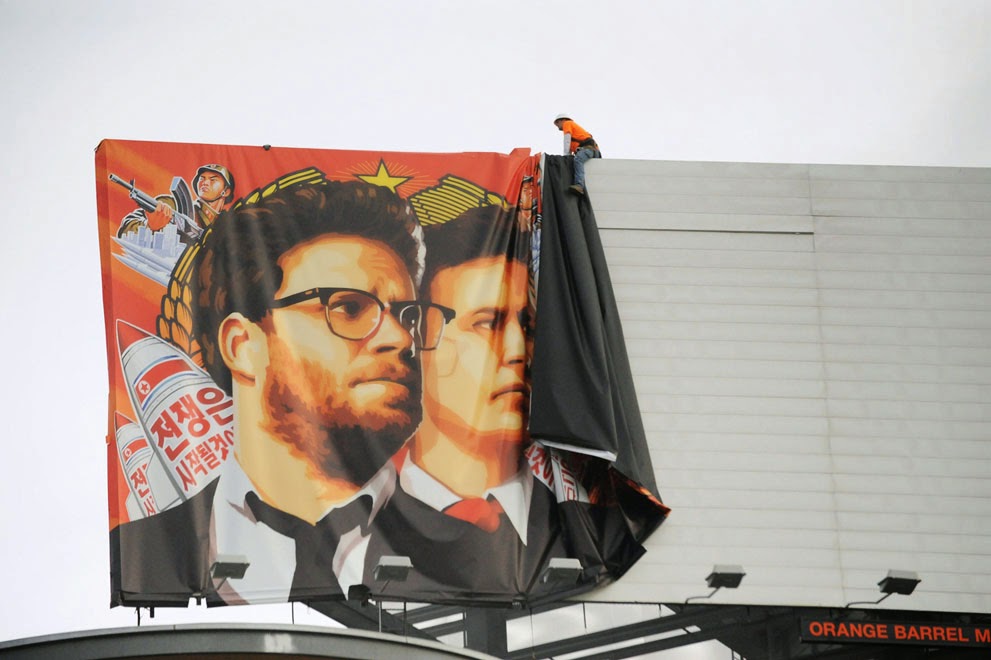 Yesterday, we learned that Sony Pictures has decided not to release its much-ballyhooed film, The Interview. You can click the link to see the trailer. At least, I think you can. The trailer is currently available on the internet, as I write this. Maybe Sony will withdraw the trailer, too.

According to IMDB (the Internet Movie Database), here is a fair synopsis of the movie:

Dave Skylark and producer Aaron Rapoport run the celebrity tabloid show "Skylark Tonight." When they land an interview with a surprise fan, North Korean dictator Kim Jong-un, they are recruited by the CIA to turn their trip to Pyongyang into an assassination mission.

This movie has been described as a "Screwball Comedy." Loads of laughs, right?

North Korea apparently did not think so. Apparently as a result of the upcoming release of The Interview, hackers believed to be associated with North Korea broke into the Sony corporation servers and then made public lots of the information they found. This information included, among other things, something close to ethnic slurs reflecting on President Obama and the specifics of various internal corporate fights, including a little hissy fit thrown by the much-beloved Alex Trebek, host of the popular Jeopardy television show.

After having demonstrated their ability to score points by internet hacking, the hackers then threatened to carry out a "911 style" attack on theaters that showed the movie. Sony (and theater operators) took this threat seriously, and Sony told theaters that had contracted to show the movie that they could withdraw from their contractual arrangement, and that they didn't have to show the movie if they didn't want to.

Most of the theaters in the United States, including all of the major theater chains, decided not to screen The Interview. Faced with this, Sony decided not to release the movie anywhere.

The Wall Street Journal said that that this capitulation to North Korean threats will "not be remembered as a profile in Hollywood courage."

Various "celebrities" expressed "outrage" over the cancellation. Late night talk show host Jimmy Kimmel said that the cancellation was "an un-American act of cowardice that validates terrorist actions and sets a terrifying precedent."

Now, here are a few thoughts I have, based on these recent events:

Focusing on that last point, for just a second, and agreeing that there are legitimate grounds for "outrage" at what the hackers have done to the Sony corporation, and at their threats to kill moviegoers who watch The Interview, isn't it also "outrageous" to suggest that our government should be plotting to assassinate foreign leaders (no matter how bad they are)? Since when is is appropriate for the United States government to decide which foreign leaders should be allowed to live, and which should die? (Of course, the President is asserting his unilateral right to decide to kill any individual whom he designates a "terrorist," even American citizens, but the same comment applies: is that really "ok"?)

Isn't it true, in other words, that the whole story line upon which The Interview was based is totally outrageous and offensive?

The fact is, the United States government has repeatedly tried to kill foreign leaders that the government didn't like (and sometimes successfully).

It's a shameful record.

It's no laughing matter!