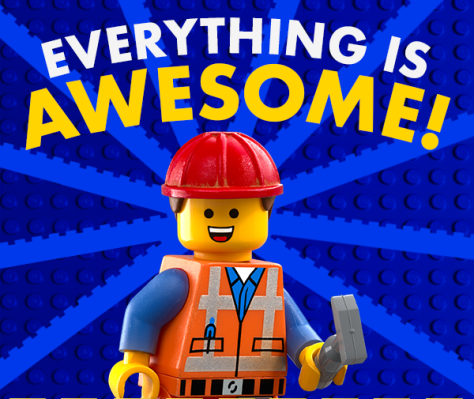 
Have you seen “The Lego Movie” yet? If you haven’t you should. I don’t care if you have kids or not, if you value culture that contains a powerful message for liberty and individual freedom and creativity this is your movie. It maybe [sic] one of the most important movies about liberty ever because it is aimed at children and will be watched by them repeatedly.

The main theme song is called “Everything is Awesome" and is the theme song to the lives of the oppressed legos who live in a highly controlled environment dominated by “President Business” who is really the evil “Lord Business” who rules as a tyrant and placates the people by using music, tv, and tacos, a modern version of bread and circuses.

This quick movie review comes to you from a blog called "Boston's Gazette," which has staked out its blogging territory "at the intersection of performance and politics." The blog entry from which the quote comes says that the movie is intended to be a "critique of the Obama Administration." Well, naturally! Isn't everything? All the sentiments referenced in the above quoted material are to be attributed solely to "Boston's Gazette."

I must admit that I was unaware, until yesterday, of the hit song "Everything is Awesome." In fact, despite the frequent presence of two grandchildren in my house (and life) I was only peripherally aware that there is something called The Lego Movie. Despite my misgivings about the message quoted above, I think I should probably take the advice of "Boston's Gazette" and see that movie. But maybe I'll see what my grandchildren have made of it, first.

At any rate, Jon Stewart, chief architect of The Daily Show, seems to believe that the lyrics to "Everything Is Awesome" are actually "satiric." Click this link to see how The Daily Show has used the song to decipher the deeper meaning of the recent report on the United States use of torture under the Bush Administration.

If you want to listen to the original "Everything Is Awesome" song, click right here. I have to admit that the song is "catchy." The lyrics of the chorus say:

I will obviously have to watch the movie itself if I want to decide whether or not I think the movie makers intended these words to be ironic or satiric. Jon Stewart seems to think so, but apparently the writer in "The Boston's Gazette" doesn't come to that conclusion.

For my part, having now watched the environmental take on the song, intended, among other things, to discredit what has apparently been an effort by Shell Oil to appropriate Legos for its own, corporate purposes, the line about "living our dream" has the most resonance for me.

It's time to wake up!