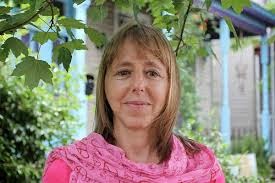 Medea Benjamin (pictured), an internationally recognized  political activist and the co-founder of Code Pink,  spoke in Santa Cruz last Saturday evening. Among other things, Benjamin reported that the following chant is on the street in all the cities where she has been, where protests about police violence are being held:

Send the killer cops to jail

Is guilty as Hell

I think it's fair to say that Benjamin's Santa Cruz audience agreed that we have a "systemic" problem with respect to unchecked police violence against people of color. Benjamin also mentioned a few other problems, including the almost total reliance of United States foreign policy on demonstrably dysfunctional and ineffective military approaches to conflicts around the globe. She mentioned the extension of this military thinking into our local political life, too, citing the increasing militarization of local police forces.

On Tuesday of this week, and thus after Benjamin spoke in Santa Cruz, the Santa Cruz City Council voted to acquire an armored, military type vehicle for the local police force. With Santa Cruz having a reputation as a "progressive city," this action somewhat proves her point.

Benjamin's talk took place at the Resource Center For Nonviolence. The audience was engaged (but relatively small). No chants left the room. I am not at all sure that chants like the one Benjamin cited are the best cathartic; or the best political strategy to address the problems she identified. But the problems are real, and urgent, and Benjamin's basic message is indubitably correct: we need more persons engaged in confronting and opposing a political and economic system that has systematically gone wrong - in our local communities, nationally, and around the world!