#276 / The Cancer Of Violent Extremism 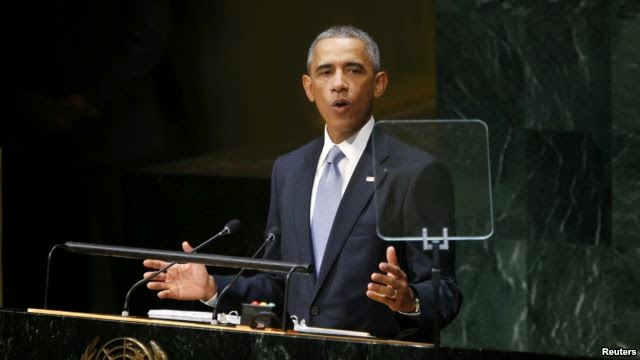 It was unclear to me, reading the Voice of America news story, whether or not that headline captured a direct quote from the President. I assume it did, and the headline certainly captured the spirit of what the President said. The article did clearly quote the President as saying "the future belongs to those who build – not those who destroy.”

I am with the President...

But wait; that's not really true.

Here's the problem, and maybe the President just doesn't get this: BOMBING people is generally considered to be "violent extremism" by those who are being bombed (and by lots of people who are lucky enough not to be targeted themselves).

BOMBING people is "destroying" not "building."

If the President is right about who owns the future, the United States (thanks to his unilateral action) is not going to qualify.

If you look up the following well-remembered phrase with an internet search - "do as I say, not as I do" - you can quickly click through to the following, related definition:

hypocrisy (hɪˈpɒkrəsɪ)
n, pl -sies
1. the practice of professing standards, beliefs, etc, contrary to one's real character or actual behaviour, esp the pretence of virtue and piety
2. an act or instance of this

I am not saying it's easy, but the United States is going to have to figure out how to combat the cancer of violent extremism without ourselves using extreme violence. And if we don't figure that out, the future we hope to build will never get past the blueprints.