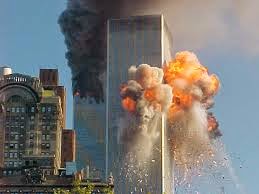 This year's anniversary of the 9/11 attacks has come and gone. On September 11th, I happened to pick up the summer 2014 edition of WIN, the War Resisters League magazine. WIN quoted Martin Luther King as follows:

Bombs that are dropped abroad explode at home.

On September 10th, the day before I read what Dr. King had to say about the topic, President Obama announced that he would be dropping a lot more bombs.

Abroad, he said. The President will be dropping those bombs abroad. In various new locations. In places where he is not already dropping bombs.

The President's decision to drop bombs abroad is generally considered to be made on behalf of the American public. While the President is giving the orders, and deciding what to do, common parlance says that WE are doing the bombing.

Wouldn't you like to count yourself out? Or at least have your elected representatives in Congress vote on the issue?

According to Dr. King, a bomb abroad means a bomb right here!