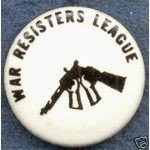 I affiliated myself with the War Resisters League in the middle of the 1960's, as I sought the company of those seeking to stop the War in Vietnam. More than fifty years later, I am still reading WIN magazine. I still like the way they present themselves:

If you think that major, fundamental, important changes need to be made in the world that we create, changes that could really be called "revolutionary" changes, then the WIN tagline may speak to your condition.

Any truly revolutionary change can be achieved ONLY by nonviolence.

That means "dying" for your country, your principles, your party, your cause, and the truth.

Not "killing" for them.

You could say Gandhi. But don't say "kill for peace."

You could say King. But don't say "kill for freedom and equality."

You could say "WIN through revolutionary nonviolence."