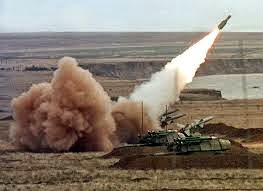 Pictured above is a surface to air missile like the kind of missile believed to have blown Malaysia Airlines Flight #17 out of the sky over the Ukraine. Shown below is one of the "Iron Dome" missiles being used in the current fighting between Israel and Hamas.

I started thinking about modern weaponry when I read an article in yesterday's edition of The Wall Street Journal. The article was titled "Japan Inc. Now Exporting Weapons." Appearing in the "Marketplace" section of The Journal, the article was presented as "news," and not as an "editorial" statement. However, there was a fairly censorious tone to the article; at least I thought so. The article stated that Japan is "a nation that [has] long hesitated to turn its technology prowess into arms-sales profits." Maybe I am wrong, but I read into that statement a kind of "disapproval" of the apparent change in what has been Japan's official policy since the end of World War II. 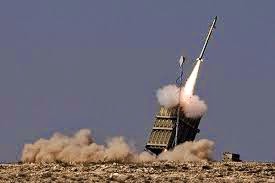 If that tone of "disapproval" in the article is not just my imagination, it would make sense that the story appeared in the "Marketplace" section of The Wall Street Journal. I do not recall The Journal ever bemoaning the fact that the United States has turned its "technology prowess" into arms-sales profits; what might be rankling The Journal about the change in Japan's policy is that United States arms exporters are now going to be facing some competition from Japan. Isn't that what a "marketplace" is supposed to be all about? Maybe, theoretically! As Noam Chomsky has recently said, however, in an excellent interview with Chris Hedges, "business hates markets."

Apparently, arms sales add up to a $400 billion dollar per year business, and U.S. companies are the biggest "winners" in this sector of the global economy. The "losers" are the ordinary men and women inhabiting this most non-peaceful planet, who are dying daily as the result of the deployment of weapons that demonstrate the "technology prowess" of the United States.

You know, there is absolutely NOTHING in the Second Amendment to the United States Constitution that would prevent us from deciding that this nation's "technology prowess" should not be used to kill innocent men, women, and children.