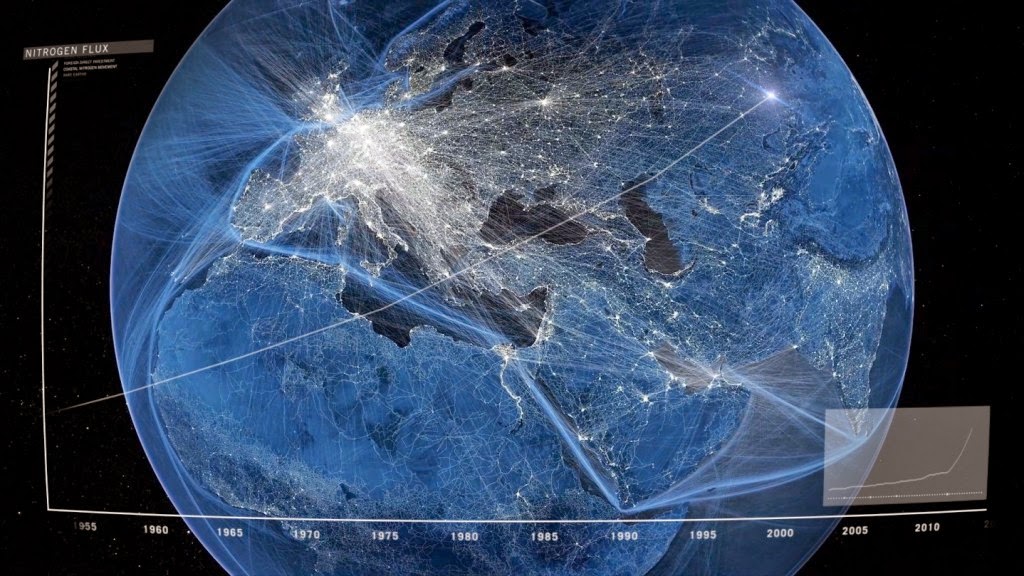 Nathanael Johnson is a writer who lives in San Francisco. He has written a book called All Natural. He apparently started thinking about the "Anthropocene" as he wrote this book. As Wikipedia defines it, "the Anthropocene is an informal geologic chronological term that marks the evidence and extent of human activities that have had a significant global impact on the Earth's ecosystems." I actually recommend that you get Elizabeth Kolbert's take on the term, if you are not familiar with it.

Johnson became aware, as he explored the topic, that there is a kind of debate about whether there could ever be a "good" Anthropocene. He decided to do an article, recently published in Grist, that explores this topic by way of a dialogue between ethicist Clive Hamilton ("The New Environmentalism Will Lead Us To Disaster" and Requiem For A Species) and journalist Andrew Revkin ("Paths To A Good Anthropocene").

Johnson's article is titled "Is the Anthropocene a world of hope or a world of hurt?" The article is worth reading, though it doesn't actually resolve the question presented, at least in my opinion.

I am citing to Johnson's article for one reason. About halfway through the dialogue, as Johnson is summarizing the points of view being expressed, he says this:

NJ Just to sum up, clearly we have giant cultural issues to work out. I don't see a revolution coming with humans ascending to a higher ethical state anytime soon, though I would certainly welcome and work for it. But it seems like in the meantime it doesn't hurt to be working on incremental, pragmatic measures, with the full awareness that it is primarily a political fight, with entrenched interests working against us. At least that gives us the option, if there are less bad alternatives out there, of making our way toward them.

Johnson's statement that the the future of the Earth is "primarily a political fight" is really a way to say that we will live, inevitably, in the world we create as humans, and that even as the challenges for our world come to us from the World of Nature, which is now being altered by the actions we have taken, and are taking, within our human world, the "fate" of our world is dependent on our political choices.

This understanding is exactly the point of this Two Worlds blog. It is politics, in the end, that creates the world in which we most immediately live.