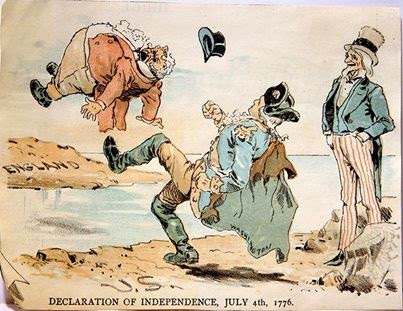 Joe Simitian is one of my favorite local government officials (and a person who provided superlative representation to a good portion of Santa Cruz County in the California State Senate, until term limits sent him back to the local government level in 2012). Joe Simitian now serves as a County Supervisor in Santa Clara County.

A couple of days ago, on the Fourth of July, Joe put the above picture on his Facebook page, with this brief comment: "You look great for 238!"

I like the picture, and I don't want to disagree that the United States still has lots to be proud of, 238 years after our revolution in 1776. However, I question whether the "looking great" label is the best descriptor for our contemporary democracy.

Self-satisfaction is never an endearing quality, and I'd want present day patriots to be a little bit more self-critical, and a little less self-congratulatory, about just how "great" we are doing.

We have a Supreme Court that has just ruled that religious belief trumps a democratically enacted law. NOT what the First Amendment promises in stating that there will be a separation between Church and State.

We have a Chief Executive who claims that he has the right, personally, to direct government agents to kill American citizens if he, in his sole discretion, decides that such persons pose a terrorist threat to the nation. NOT the kind of government we fought our revolution to establish.

We have a Congress that is responsive almost entirely to huge corporate spending, and one branch of which (the United States Senate) operates under rules that ensure, as a practical matter, that every law must be enacted by a supermajority. This is NOT a Congress that legislates on the basis of a "majority rule" principle.

We had better start figuring out what to do about it, too.