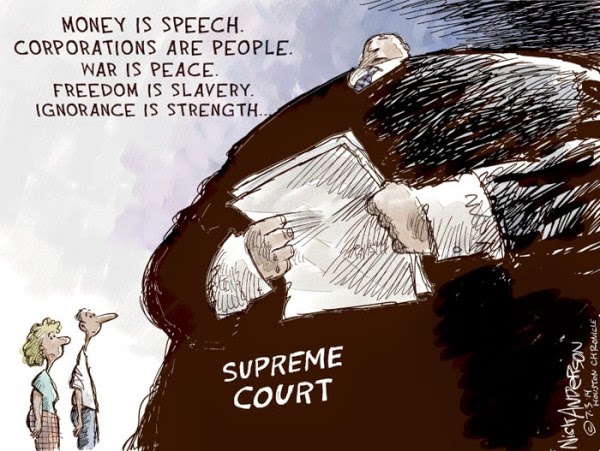 The Fourth of July is always a great day for political commentary and opinion. And for hard-hitting editorial cartoons.

The cartoon above, by Nick Anderson, indicates how the United States Supreme Court seems to be channeling George Orwell, in its Hobby Lobby decision. Anderson's cartoon was first published on Wednesday, July 2nd, in the Houston Chronicle, and was then republished in the July 4th edition of the San Francisco Chronicle. That's where I saw it.

The July 4th edition of the San Francisco Chronicle also ran a particularly fine editorial, which was titled "Keeping a republic requires hard work" in the online edition.

In the headline used in the print edition, the Chronicle cited to Benjamin Franklin, and to his comment to the press when he was leaving the Constitutional Convention of 1787. The question posed to Franklin, which we can imagine being shouted from a pack of reporters running to catch up with a possible story, was what type of government had just been created.

A republic, if you can keep it.

The Chronicle's online call for "hard work" to maintain our Constitutionally-based system of citizen self-government is certainly appropriate. At a time when that system is at real risk, and evidences of corrosion and rot are manifest in all the branches of the government, not just in the Supreme Court, "hard work" is obviously necessary.

Necessary, but not sufficient.

We are going to have to do more. Outside of the safety zone, you might say. Something like what they were doing back in 1776.

That is what we are supposed to have been thinking about on the Fourth of July.