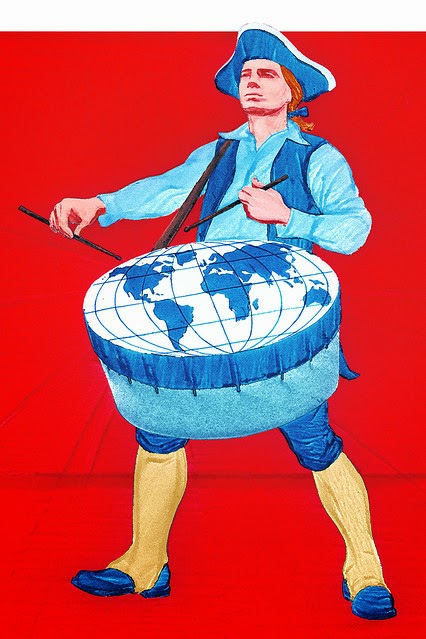 The Journal article, titled "Words Heard Round The World," pointed out that the Declaration has two main thrusts. One, the Declaration announced the creation of a new nation, the United States, and proclaimed that we were now "independent" of England. That was, in fact, the main purpose of the Declaration of Independence.

Second, and more or less by accident, the Declaration established how individuals would be treated within the new nation whose independence was being declared. This is the part we tend to remember most:

We hold these truths to be self-evident, that all men are created equal, that they are endowed by their Creator with certain unalienable Rights, that among these are Life, Liberty and the pursuit of Happiness.

The Journal's article was accompanied by what I think of as a rather ominous illustration, reproduced above, perhaps suggesting that it is our role to pound on the world, as necessary, to make other nations conform to the designs that we have utilized ourselves. That would be consistent with The Journal's view of international affairs.

The "lesson" from the article, however, was that other nations have, indeed, and without any particular prompting from us, utilized the Declaration of Independence as a model. What most nations have focused on, however, is the national "independence" part of the Declaration, and not its statements about "inalienable rights."

Bringing it all back home, as we leave our Fourth of July holiday behind, I think our patriotic challenge, today, is not to campaign in the world for others to adopt our approach to government. Rather, it is to restore, here, the kind of government originally established upon the foundation of the Declaration of Independence.

The Journal article ends with a reference to Thomas Jefferson:

In July 1776, the world-historical potential of the Declaration of Independence was hardly evident, but the centuries that followed have demonstrated the wide appeal of its principles. As Thomas Jefferson wrote just weeks before his death on July 4, 1826, the Declaration was "an instrument" that had been "pregnant with our own and the fate of the world," encouraging people everywhere "to assume the blessings and security of self-government."

Genuine self-government (here, in this nation) is at risk today, not our national "independence." And to have self-government, we are going to have to get involved ourselves.