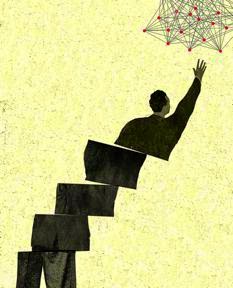 I am becoming quite a fan of Jill Lepore:

Now, I like her latest piece in The New Yorker. The article is labeled as an entry in the "Annals of Enterprise," and is titled "The Disruption Machine."

In this most recent article, Lepore pretty much destroys the pompous proclamations of Clayton M. Christensen, author of The Innovator's Dilemma. That book was written in 1997. Its success ultimately led to a career for Mr. Christensen premised on a theory he calls "disruptive innovation." Christensen is associated with Harvard Business School, and his website proclaims him to be the "World's Top Management Thinker."

As Lepore tells the tale, Christensen's theory promises more than it is able to deliver:

The theory of disruption is meant to be predictive. On March 10, 2000, Christensen launched a $3.8-million Disruptive Growth Fund, which he managed with Neil Eisner, a broker in St. Louis. Christensen drew on this theory to select stocks. Less than a year later, the fund was quietly liquidated.

Christensen sees "disruptive" enterprises as the innovating heroes of the economy. He touts all the brash, high-tech companies that hire (and fire) with great bravado and éclat, and that live their brilliant (and often ephemeral) lives amidst claims that their economic disruptions are nothing less than the portal to a better life and prosperity (and let's not worry about all the folks put out of their jobs).

For Christensen, "disruption" seems a good per se.

Lepore is a historian (she is a professor of history at Harvard University), and she actually researches and reports upon the historical record, finding that the facts quite often don't fit the Christensen theory. It turns out that those companies that just "plug along," making incremental improvements and progress, may be the actual foundations of a good economy. Betting our future on "disruptive innovation" may be a short route to an economic fireworks display.  Followed by darkness.

I am becoming quite a fan of Jill Lepore.