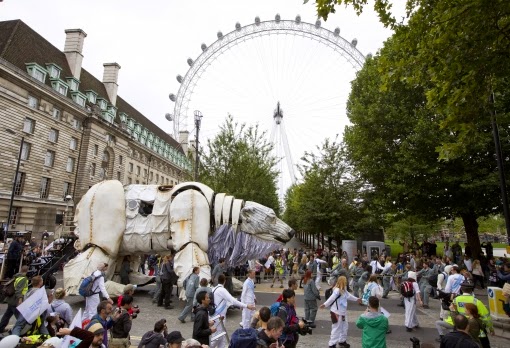 A Facebook Friend posted this picture (with an attached article from New Statesman). It appears to depict a polar bear on a London visit.

The main point made by the article is that when environmental issues become "abstract," and removed from any local reference,  as the issue of global warming tends to be, for most people, it is hard to get people really engaged in the political struggle necessary to protect our environment.

In fact, having worked to advance an environmental agenda as a local government official, for twenty years, I completely agree that "people have a strong sense of local attachment, including a resonant spirit to conserve, which we can rarely muster when thinking about the global."

It is little known, but true, that Santa Cruz County led the national fight to stop offshore oil drilling in U.S. waters. That fight, carried out in the halls of Congress, was largely successful, and ultimately resulted in the creation of the Monterey Bay Marine Sanctuary, as well as a "moratorium" on new offshore oil development off both the East and West coasts. It was the threat to our local, beloved coastline that energized local activists, starting in Santa Cruz, and ultimately extending up and down the California coast. Even Republicans joined in the effort. People love the coast in Orange County and San Diego County, too.

The lesson in this experience seems clear to me. One of the best things we can do about the environmental challenges we face, even including the "global" ones, is to engage ourselves, personally, in environmental protection efforts where we live.

If nothing else, we will build the political skills to move on beyond our local communities. And fighting for the place we call home can energize us for the entirety of our lives.

It has worked for me!