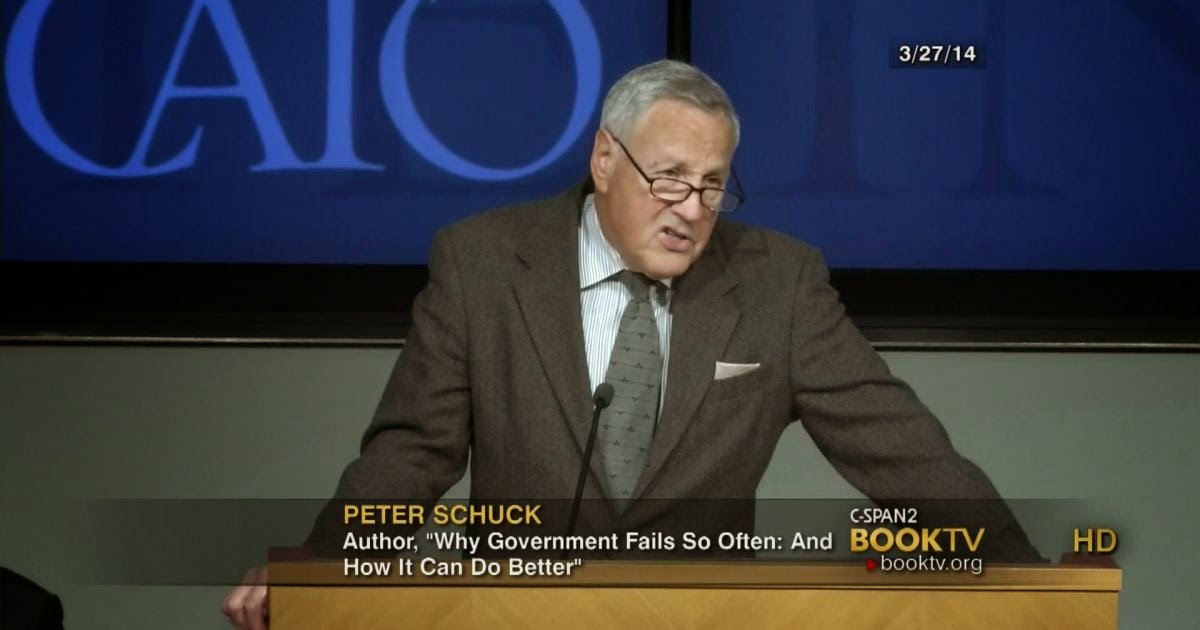 Pictured is Peter Schuck, a professor at Yale Law School. Schuck is the author of a book called Why Government Fails So Often. I found out about the  book from a review in The Wall Street Journal, my go-to source for critiques of government.

As is so often true, I do not feel compelled actually to buy and/or to read this book, based on the review. I think I get the gist. Among other things, the review provides this summary of Schuck's argument:

It is essentially impossible for centralized managers to consolidate information to the degree necessary to manage complex social systems, and bureaucracies respond to failure by demanding even more power.

Based on this statement, it may be that Schuck and The Journal are "fighting the last war." I don't think there is much debate about the fact that a government that actually tries to manage a society through a "centralized" form of control (as the government of the Soviet Union apparently did) is almost certain to fail.

Six days a week, The Wall Street Journal opines that any such "regulatory" approach to government would be a terrible thing, and that those who advocate government regulation as a way to achieve social goals (including particularly that kind of regulation most usually called taxation) have demonstrated that they "hate the free market," which is The Journal's golden calf. The "free market" is defined by this rule: individuals can do what they want, and don't have to respond to demands from "government." Both rich people and poor people will have an equal right to sleep under bridges. No regulation will impede this commitment to personal freedom!

Schuck may have a more nuanced approach than The Journal, since the review states that Schuck argues that "the proper sphere of the central government is to set goals and arrange incentives so that society's knowledge can be better put to use by its dispersed possessors."

That last statement makes sense to me, and seems to be consistent with my concept of government. My idea is that we (the people) have a democratic opportunity to "legislate" our common goals. The process goes from politics >; to law >; to government, and "government" is what that process is usually called, since that is the result of our political/legislative efforts.

If "government" is failing (and I am ready to accept that premise) the fault lies not in a bureaucratic quest for control by centralized managers, but in our common political failure to use the democratic power of the people to "set goals" that will require individuals to conduct themselves in a way that will achieve those goals for the society. Mostly, that means that individuals who have the means to do so must be required to pay the taxes necessary to achieve the legislated social objectives.

The question "Why Government Fails" really comes down to the question why "we" fail. In a system that provides the people with a democratic opportunity to demand that all individuals in our society so conduct themselves as to achieve the overall goals of society as a whole, why haven't the people used their powers of self-government successfully to achieve their commonly agreed upon objectives?

The Wall Street Journal, house organ of the organized 1%, doesn't like "government" because it doesn't like "self-government," which provides an opportunity for all the rest of us, if we act together, to create a world that responds to our deepest aspirations and hopes.

If The Journal can convince us that "government" fails, then "government" will fail indeed, because we will give up trying, and start worshiping that "free market" god that glitters just like gold.

The Journal suggests we can cure the ills of the world by the way we consume. You've heard that one, right?