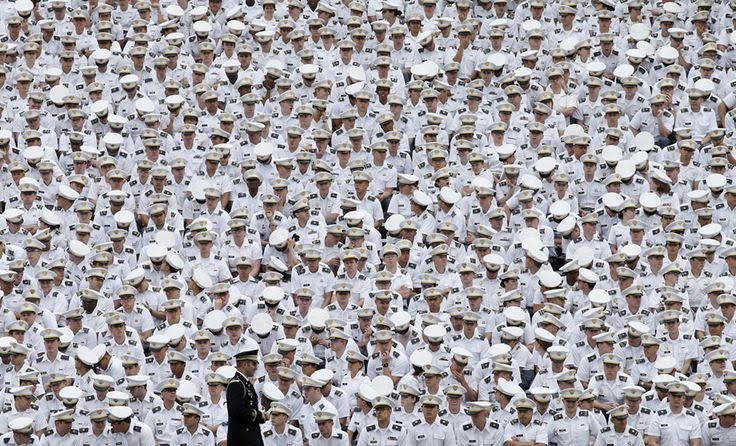 The pundits seem to have lots to say about President Obama's speech to the graduating class at West Point (pictured above).

I have already reported on what David Brooks had to say about the speech. Brooks commented right out of the box, and he wants more military action. The Brookings Institution ran a compilation of pundit pontifications. Again, these were fast breaking judgments, and most of the pundits quoted thought that the President's speech was lacking. It was "likely to raise additional concerns...," in the words of Thomas Wright.

Trudy Rubin, who writes for the Philadelphia Inquirer, took more time to contemplate the failures of the President's approach to national security. Since Rubin had more time to think about the topic, you might expect her analysis to be more far-reaching and acute. Not so, as it turns out. Rubin questions the President's "ability to lead," from Syria to the Ukraine, and offers this observation:

Let's start with terrorism, which Obama identified at West Point as the prime threat to Americans. His main proposal is a new fund to train partner countries from South Asia to the Sahel to fight their own terrorist battles. However, we already do that. Much more is needed. By more, I don't mean war.

Rubin doesn't "mean war," so what does she suggest? Nothing, actually. At least David Brooks is honest enough to say, outright, that he favors military action. Rubin, in contrast, has no positive ideas of her own; she just knows that she doesn't like the President's ideas.

My favorite pundit pronouncement came from Eugene Washington, an opinion writer for the Washington Post. I didn't much like the headline, "Sending drones not divisions," but I do think he captured the essence of the President's message to the graduates, in ending his column with this quote from the speech: