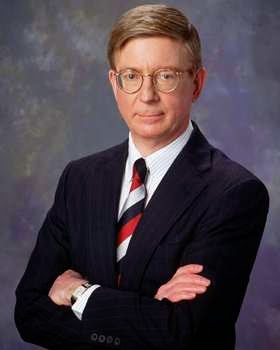 George Will, pictured above, is a columnist for the The Washington Post. I don't always agree with Mr. Will.

Actually, that is sort of an understatement.

In a column printed in the April 17, 2014 edition of the San Jose Mercury News, Will reviewed a new book by Timothy Sandefur. Sandefur's book is titled, The Conscience of the Constitution: The Declaration of Independence and the Right to Liberty.

The Declaration is the light by which we must guide our understanding of our political and legal institutions. More than a merely rhetorical statement, the Declaration sets the framework for reading our fundamental law.

Will agrees with this idea. Although he concedes that our democracy must both protect individual liberty and allow the majority to govern our collective affairs, Will joins Sandefur in coming down on the side of individualism and its claims to individual liberty over the "community" part of who we are, and the need for effective mechanisms of collective self-government. Will concludes his column as follows:

Sandefur says progressivism "inverts America's constitutional foundations" by holding that the Constitution is "about" democracy, which rejects the Framers' premise that majority rule is legitimate "only within the boundaries" of the individual's natural rights.

Many conservatives should be discomfited by Sandefur's analysis, which entails this conclusion: Their indiscriminate denunciations of "judicial activism" inadvertently serve progressivism. The protection of rights requires a judiciary actively engaged in enforcing what the Constitution is "basically about," which is making majority power respect individuals' rights.

Unfortunately, George, you got it wrong again! I haven't actually read Sandefur's book, just Will's review and a few brief excerpts, but Sandefur apparently gets it wrong, too.

It is simply not true that the American system of government grants a preference to individual "liberty" over "democracy," which is the right of the majority to decide, for us all, what we should do together. The ideas advanced by both Will and Sandefur reflect the ideology of individualism, which is corrosive of social solidarity, when carried to its extreme. Such a corrosive "individualism" seems to be prevailing in the contemporary political environment (the "Reagan Revolution" triumphing over the Roosevelt New Deal), and it is this emphasis on individualism over everything else that is undermining our ability to achieve a satisfactory system of democratic  self-government.

As a slight digression, for those concerned with the Constitution's commitment to individual liberty, it would be important, one would think, to oppose claims made by the President of the United States that he can decide, in his unfettered discretion,  whether or not to murder American citizens. It would be important, for those who are focused on the Constitution's commitment to individual liberty to speak out against the government's use of its power to utilize the tools of spycraft to put all of the citizens of the nation under constant surveillance.

In fact, contrary to both Sandefur and Will, the Constitution is "basically" about structuring how the mechanisms of self-goverment should work, what powers are allocated to whom, and how such powers should be checked. The Bill of Rights, added after the Constitution was drawn up, does point to the need to protect individual liberty - again, a very important topic - but the Constitution is clearly about both!

The Declaration of Independence is about both, too - and that is where Sandefur goes wrong. Everyone remembers these famous words of the Declaration: "We hold these truths to be self-evident, that all men are created equal, that they are endowed by their Creator with certain unalienable Rights, that among these are Life, Liberty and the pursuit of Happiness."

There is a big emphasis on individual liberty in the Declaration. No doubt about that. But let's not forget the words that come immediately after those famous words just quoted:

That to secure these rights, Governments are instituted among Men, deriving their just powers from the consent of the governed.

Liberty doesn't trump democracy. Individualism does not trump our commitment to the democratic mechanisms of self-government.