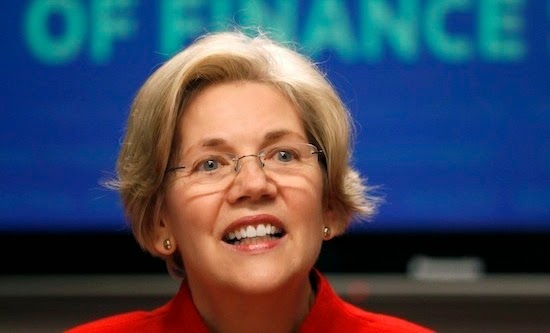 The picture above is from an article you can still read online, though it was published in October 2011. The article is titled "Wall Street lobbyists go into overdrive to defeat Elizabeth Warren."

The Wall Street lobbyists lost. Elizabeth Warren is now a member of the United States Senate, representing Massachusetts. She has just released a political biography entitled A Fighting Chance. Warren says this has nothing to do with a possible run for President (darn).

I read about Warren's new book in The New Yorker. A review by Jill Lepore is available online. I recommend it.

Here's what I liked best in Lepore's review:

In 2008, Warren joined a five-person congressional-oversight panel whose creation was mandated by the seven-hundred-billion-dollar bailout. She found that thrilling and maddening, too. In the spring of 2009, after the panel issued its third report, critical of the bailout, Larry Summers took Warren out to dinner in Washington and, she recalls, told her that she had a choice to make. She could be an insider or an outsider, but if she was going to be an insider she needed to understand one unbreakable rule about insiders: “They don’t criticize other insiders.” That’s about when Warren went on the Jon Stewart show, and you get the sense that, over that dinner, she decided to run for office.

I am for the "outsiders."