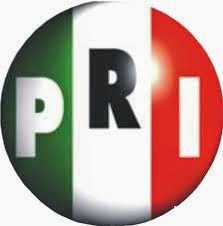 Speaking of oligarchy, consider el Partido Revolucionario Institucional, also known as PRI. For most of the Twentieth Century, PRI ruled in Mexico.

"From 1929 to 1982, the PRI won every presidential election by well over 70 percent of the vote." That's what Wikipedia says. Supposedly "democratic" elections always seemed to result in the same outcome. It was, in fact, a "single party" system down there south of the border.

That "one party" approach to government, and the consistent electoral victories that the party achieved, should have been a warning that "democracy" might not actually be a major feature of the governmental system in Mexico. From 1965 on, I was quite interested in politics and government, but I missed learning anything about Mexico. I wasn't paying much attention to Mexican government and politics, and I simply assumed we had a democratic neighbor to our south.

I didn't know about the PRI until I started getting serious about learning Spanish. That was in the 1980's. Then, I spent a month in Cuernavaca, taking an intensive Spanish course, and also took a course at Cabrillo College from Consuelo España, called The History and Culture of Mexico. I found out that what I had assumed was our democratic neighbor to the south was in fact a country operating under the political domination of a rather ruthless dictatorship, with its benefits accruing mainly to the well-connected and the wealthy.

Another "tip off" should been the name itself. Any political party that claims to have "institutionalized" a "revolution" should automatically be suspect.

Up here in the United States, of course, we definitely have two parties. So, no problem, right? Democracy is guaranteed. Well, not if you believe that Princeton study I reported on yesterday. Here, the same kind of oligarchic government is in power, but we get fooled into thinking that there is a real debate going on.

Like I said, I think we probably need to do something about that!