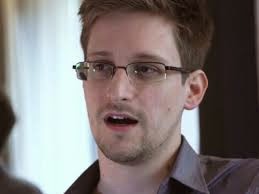 Edward Snowden thinks that we should know what our government is doing, and that we should particularly know if it is spying on us. Liam Fox, writing in The Wall Street Journal, obviously disagrees. Fox is a member of the British Parliament, and is described as a "conservative." His opinion piece claims that Snowden and Snowden's "accomplices" (the journalists who published the news that Snowden made available) have "done great harm."

According to Fox, "those who live without a full grasp of the risks and sacrifices taken by others on their behalf will not understand the constant battle for law and freedom, against disorder."

Let's set aside for a moment the claim that the spooks who are monitoring our emails, text messages, and telephone calls are taking risks and making sacrifices for "us." I must say I don't quite get that. I don't much understand the claim that they are taking "risks" or making "sacrifices," and I really have a hard time thinking that their motivation is for "our" benefit.

Let's focus on the rest of Fox's analysis.

Fox apparently thinks that "order" is allied with and helps establish conditions of "freedom." That strikes me as an overstatement. There are probably some cases in which conditions of "disorder" have a negative impact on "freedom." In most political philosophies, however, "freedom" and "order" are seen more or less as opposites. Imposing "order" reduces "freedom." Totalitarian governments are on the "order" side. Those governments dedicated to individual "freedom" seek to prevent governmental intrusions into the private affairs of ordinary men and women.

The government of the United States (with some lapses in judgment - slavery being the most obvious, of course) is generally considered to have made a commitment at the very beginning to the "freedom" side, as opposed to the "order" side. You could check the Fourth Amendment, for a reference to our individual "freedom" against the inquisitive demands of a government seeking "order." The rest of the Bill of Rights is more or less to the same effect.

In fact, there does need to be a balance between "freedom" and "order." In a democratic society, there needs to be an ongoing debate between the advocates for each side, focused on specific cases that are relevant to the times.

In order to have a "debate" however, all sides must have access to the facts of what, in fact, is being done, what the facts are. Snowden is for disclosure.

I think he has the high ground in any debate with Fox.

I have recently read what I found to be a riveting description of how Edward Snowden came to make the disclosures he did.

The article was published in Vanity Fair.