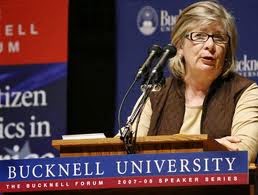 Barbara Ehrenreich (pictured) is a well-known author who has, apparently, self-identified as an atheist throughout her career. Recently, she appeared on NPR's "Fresh Air," with Host Terry Gross. Her appearance was focused on a discussion of Ehrenreich's latest book, Living With A Wild God. You can read a transcript of the interview by clicking the link.

Although self-identified as a "non-believer" and an "atheist," Ehrenreich's recent book describes her personal encounter with the transcendent:

The world flamed into life. How else to describe it? There were no visions, no prophetic voices or visits by totemic animals, just this blazing everywhere. Something poured into me and I poured out into it. This was not the passive beatific merger with the ‘All,’ as promised by the Eastern mystics. It was a furious encounter with a living substance that was coming at me through all things at once, and one reason for the terrible wordlessness of the experience is that you cannot observe fire really closely without becoming part of it. Whether you start as a twig or a gorgeous tapestry, you will be recruited into the flame and made indistinguishable from the rest of the blaze.

I have personally had an experience quite similar to the one that Ehrenreich describes above. That experience occurred when I, like Ehrenreich, was about nineteen or twenty years old.

As I wrote quite recently, there is, I think, a kind of World of the Spirit that provides a "third dimension" to the reality (or realities) we inhabit. Anyone who thinks that they could define and describe it would be foolish in the extreme.

But keep your eyes peeled.