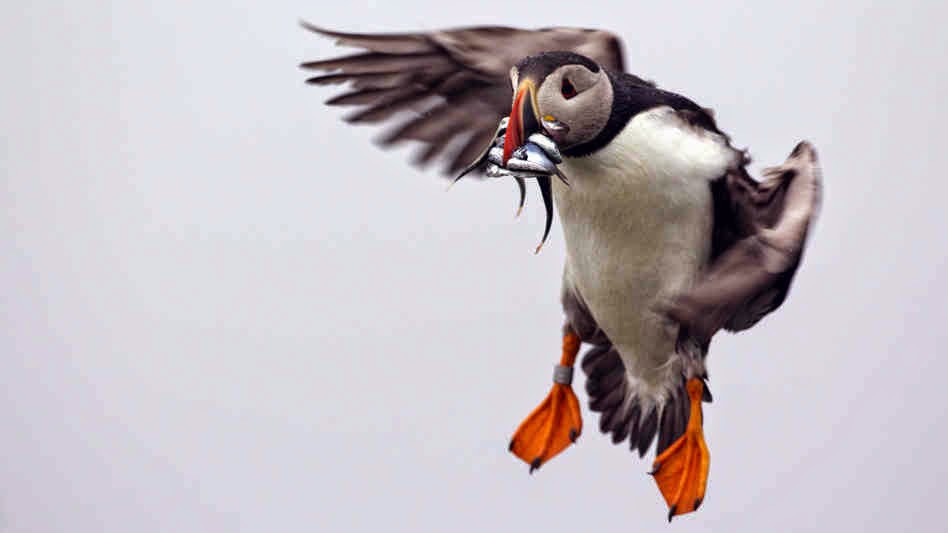 I have always liked puffins. Or the thought of puffins. I have never actually seen a puffin in the wild. Here is a nice picture of just such a wild puffin, bringing its kids some fresh fish for lunch. The image posted above is available on the NPR website, illustrating an August 2013 story about a tenuous puffin "comeback" on a rocky island off the Maine coast.

I actually saw this picture first in the May-June 2014 issue of Mother Jones. In that issue, Mother Jones ran an article called "Empty Nest Syndrome," by Rowan Jacobsen. Hopefully, the link will take you to that article, but if it doesn't (since the article seems to be reserved for subscribers only, at the time I am writing this) you may have to track it down by other means.

The Jacobsen article is a lot less sanguine than the CNN report. In effect, it turns out that all those fish you see are maybe just a bit too big for the little puffins to swallow. According to Rowan, last year puffins began bringing home butterfish to their young, not that hake or herring that has traditionally been the fish that little puffins have always loved to eat. Heartbreaking "puffin cams" documented baby puffins starving to death, in large numbers, as they tried, and failed, to eat the bigger butterfish.

According to Rowan, puffins are "the canaries in the western Atlantic coal mine. Their decline is an ominous sign in a system that supports everything from the last 400 North Atlantic right whales to the $2 billion lobster industry."

An Associated Press article, appearing in yesterday's San Jose Mercury News, featured a picture of a baby lobster, and said that "young lobsters have declined by more than half of their 2007 levels." Lobstermen, retailers, state officials, and ocean scientists are "concerned."
Yes, this is another global warming warning story. 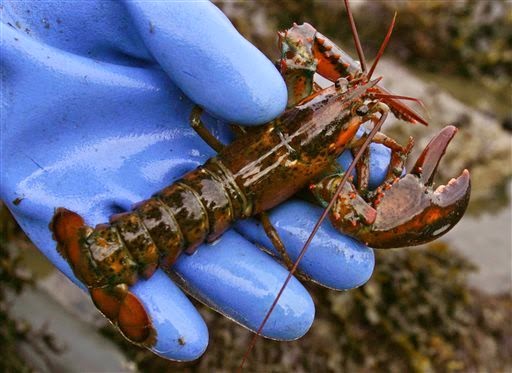