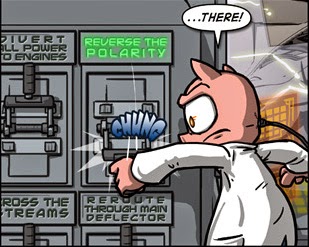 I really do think that my "Black Dog Theory," mentioned in my posting yesterday, is worth taking seriously. As citizens, we often cut our elected officials way too much slack, focusing our discontents about government on the governmental staff people who most directly carry out the programs and policies that our elected officials establish, and for which our elected officials are ultimately responsible. We need to direct our attention to the people holding the leash, and make them accountable for what their dog may be doing.

That said, I have noticed another (and frightening) phenomenon in the conduct of government business, particularly at the local level. I am sorry to say that the City Council of the City of Santa Cruz, my hometown, seems to afflicted. As I diagnose the problem, I believe that elected officials are increasingly getting it completely backwards with respect to who is "in charge" of governmental policies. In other words, many elected officials act as if their main role is to "back the staff." In fact, in our system of representative government, our representatives are supposed to represent "us," the public, and to tell "the staff" what to do, based on what the elected officials are hearing from the citizens they represent.

Unfortunately, I have seen way too many instances, in recent years, in which the elected representatives represent "the staff" to the public, as though that were their job. When this condition sets in, our elected officials act like it's their main responsibility to make the public understand and appreciate how good a job the staff is doing. In essence, these elected officials, even though they are holding the leash, actually seem to believe, themselves, that the dog is in charge.

When that situation begins to manifest itself, it's time to reverse the polarity of how power flows in our governmental systems.

And we, the public, citizens and voters, are the ones who have to flip the switch!