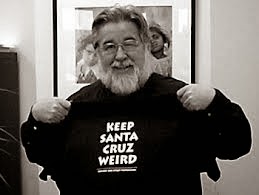 I  have always adhered to the "Keep Santa Cruz Weird" philosophy. Speaking as a former elected official, I liked the fact that the people I represented actually wanted the government to represent the majority, and to act in their interest. Oddly enough, that approach to government is actually kind of weird. That doesn't seem to be true elsewhere.

Measure J, a referendum measure adopted by the voters in 1978, said that any land that is commercially viable for agriculture must be used only for agriculture. Period. No real exceptions. That agricultural land preservation policy was felt by the community to be good for the community at large. But the policy actually disadvantaged individual farmland owners, at least in economic terms. A parcel of farmland is worth a lot more if you can turn it into a residential subdivision, or a car sales lot, or a shopping center. In fact, if those kind of uses are allowed, the per acre land price for agricultural land is about ten times higher than if the land can only be used for farming.

There are not too many communities in the state or nation (OK, none except for Santa Cruz County) that would have had the gumption to tell a lot of well-connected farmland owners that their individual opportunities to profit were just going to have to be set aside, so that the greater good could be achieved. That was pretty weird, but it was a GOOD kind of weird, at least as I see it; it was the kind of weird celebrated on the famous Bookshop Santa Cruz tee-shirt.

Because of the passage of Measure J in 1978, Santa Cruz County does not have the kind of "Good Old Days" problem I wrote about on April 7th. If you are not familiar with how Measure J got adopted, click right here to read The Story of Measure J.

If you want to read about how the word "weird" has become a "weird" marketing tool, you can click on this link. It's all about that "one weird trick" to (1) eliminate that unsightly belly fat; or (2) enlarge your penis; or (3) stay asleep all night!

Three weird tricks and you're home free!! Ready for the good life!!