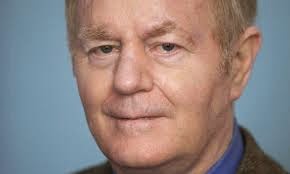 Jonathan Schell (pictured above) died on March 26th, at the age of 70. An obituary in The New York Times outlines his accomplishments. Words of tribute have appeared in The Nation, and Bill McKibben has written a  moving "Postscript" in The New Yorker.

As McKibben says, Schell wrote important books on the Vietnam War (The Village of Ben Suc) and on the Watergate scandal (The Time of Illusion), but he is best known for his book on nuclear armaments, The Fate of the Earth, the publication of which was hailed by The New York Times as “an event of profound historical moment.” 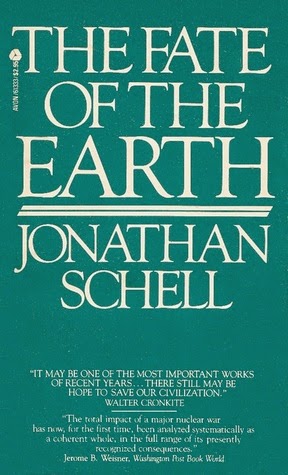 The Fate of the Earth is about the dangers of nuclear war, and McKibben, who talked to Schell during the last weeks of Schell's life, said that Schell thought that the world had "failed to come to grips with the nuclear question." Schell also said that "the same dynamic was at work with climate change." Both crises "reveal a kind of bankruptcy at the crucial hour of many of the things we place our faith in."

The "Fate of the Earth" is our fate, too. Even if we tend to forget it, we are inevitably from and of the Earth. The world we most immediately inhabit, and that seems most vivid and "real" to us, is none other than the human world we create ourselves, but our world is a world that is ultimately dependent on the World of Nature, a world that we do not create, the world that is this Earth, this planet that supports all life, including our own.

A thoughtful review of our human situation should convince us, as the recent report of the Intergovernmental Panel on Climate Change warns, that one of the most significant and immediate consequences of climate change will be an increased temptation to human conflict, at all levels, everywhere. And while nuclear weapons continue to exist, those conflicts will be the occasion for someone, somewhere, actually to use these horrific engines of destruction.

I think it is important, as we salute Jonathan Schell, that we do so with a reference to another book of his. Written in 2003, it may be that this lesser known book has something to tell us that we don't already know. It may give us some ideas that we may not yet have thought about.

We all know the dangers of nuclear weapons, and we really do understand that their continued existence is a holocaust in the waiting. More and more, we do all appreciate the reality of the global warming crisis that is putting our civilizations and much of the natural world at risk. The word is out on these crises, and if their existence reveals a kind of "bankruptcy" of many of the things we place our faith in, we might look to this book, by Jonathan Schell, to find a way forward:

The Unconquerable World teaches the power of nonviolent action. If our governments and other institutions have gone into bankruptcy, and action is needed, and if violent action (historically our recourse in times of trouble) is itself a world-terminating danger, then it just may be that the fate of the Earth will literally depend upon our ability to act, now, through nonviolent direct action, to end the crises that have put both of the two worlds we inhabit into profound peril.