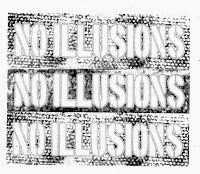 According to Norman Solomon, co-founder of RootsAction.org and founding director of the Institute for Public Accuracy, "the best way to not become disillusioned is to not have illusions in the first place."

While there are a couple of vexing and off-putting split infinitives in that sentence, making a full understanding more difficult than it ought to be, I do think I get the point: don't have any illusions about our political leaders!

Solomon's sage advice, as quoted, comes from his article titled "When Hope Turns Sour: From LBJ to Obama." Click the link to read the article.

It appears to me, from reading his article, that Solomon did, indeed, have some illusions about our current President. Probably a number of us did. For Solomon, whose article quickly surveys what we have been given by way of political leadership, "from LBJ to Obama," a discussion that begins with a warning about "disillusionment," at the start of the article, has been transmogrified by the conclusion; Solomon ends up with a claim, in his last sentence, that the actions of LBJ, Bill Clinton, and President Obama amount to a "betrayal."

I am sticking with Solomon's first piece of advice. I think I'll pass on the betrayal. Anyone who thinks any one of our political "leaders" is going to "do the right thing," should go back to the beginning and read Solomon's advice about illusions. It's good advice (split infinitives aside).