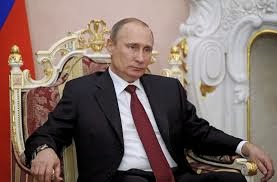 The opinion section of the Thursday, March 5, 2014 edition of the San Jose Mercury News was filled with pundits pontificating on Putin, and discussing, more specifically, recent military and political events in the Ukraine. This was the topic of the day, so naturally the pundits were out in force.

Richard Cohen weighed in with an article that appeared under the following headline: "Putin will ultimately regret Crimea incursion." He notes that the current conflicts in the Ukraine are "the old European game of jostling nationalisms," and he doesn't think Putin properly understands the situation.

Speaking from a more explicitly historical perspective, but essentially making the same point, an article written by George Will opined as follows:

For many centuries, European peace has been regularly broken because national borders do not tidly coincide with ethnic, linguistic and religious patterns.

Unlike Cohen, however, Will, doesn't want to focus on Putin. He wants to fix blame where he always fixes it, in connection with whatever topic he writes about. For Will, various Presidents of the United States, all members of the Democratic Party, are the real villains in the piece.

To make his case, Will elaborates on his observation about national borders (with which it would be hard to disagree) by blaming Presidents Wilson and Roosevelt for having made an already bad situation worse. According to Will, it was the failure of Wilson and Roosevelt to understand the ethnic, linguistic, and religious complexities of Europe after World War I and World War II that has "sown dragon's teeth" in Europe. Our Presidents (ultimately followed by the United Nations Charter) claimed that "self-determination" is the "right" of "nations," or "peoples." This claimed right to "self-determination" by "nations" or "peoples" ends up causing conflicts, as various groups fight for what they think is a "right" to displace from "their" lands those "peoples" who are of a different ethnicity, or who have a different language or religion.

Again, it's pretty hard to disagree with Will's point about the mischief that comes from people feeling entitled, by "right," physically to displace persons who are different from them. The concept that peoples have a "right to self-determination" can exacerbate a malady that seems inherent in the "game of jostling nationalisms" that has existed in Europe for so long. It also seems fair to say that this pattern is not only visible in Europe, since much the same phenomenon (perhaps in an even more virulent form) is visible in the Middle East.

What is jarring in Will's commentary (which seems to start by making an important point) is his insistence that we blame Roosevelt and Wilson for the current ethnic and religious strife and all its current consequences. Will quickly forgets the "many centuries" part of his initial comment. Is it really fair to lay a large portion of the blame for the untidy borders that don't coincide with ethnic, linguistic, and religious complexities on the doorstep of Presidents Wilson and Roosevelt, given that these conditions have, indeed, persisted for "many centuries," and were already in existence before either of them took office - or were even born? The tendentious nature of Will's argument (being more interested in making points in the contemporary politics of this country than in providing any helpful analysis) is emphasized by the fact that he swiftly moves from Wilson and Roosevelt to make negative comments about Presidents Carter and Obama (omitting any mention of any Republican Party President). It is not quite clear why Will thinks that Carter and Obama are implicated in this national borders problem, but leave it to Will to find a connection. Will claims that President Obama's commitment to affordable health care has "shattered belief in his competence and honesty," and Will definitely thinks that this needs mention, as we consider the situation in the Ukraine. For Will, it's bound to mean that everything is going to get worse. And President Obama's to blame!

I couldn't help myself from commenting on how Will is clearly more interested in savaging President Obama, and other Democratic Presidents, than in pursuing his initial point about the "untidy borders" of Eastern Europe. I may have indulged myself in my irritation, but I am irritated that he lets an important insight about the cause of conflict slip past him. Perhaps I could pursue Will's point?

I think Will is right that ethnic and religious conflicts are the cause of wars, and especially so in a situation in which "national borders do not tidily coincide with ethnic, linguistic and religious patterns." This is also true not only in Eastern Europe, but everywhere. If there is a "solution" or "remedy" to this situation, it will not be found from trying to "rearrange" or "tidy up" the borders, by giving "self-determination" to peoples and nations. Rearranging borders to eliminate the "untidiness" of borders that don't reflect ethnic, linguistic, and religious groupings has been tried. Repeatedly. Wilson and Roosevelt were both involved in such efforts. The consolidation of Eastern Europe into the U.S.S.R., and its subsequent devolvement, represents another set of rearrangements. Trying to get the borders "just right" doesn't work. It's a false trail.

If there is a solution, and I think there is, the United States has a head start in making the solution clear. Specifically, the political theories that are incorporated into our Constitution are the remedy that the world needs. Our Constitution makes clear that a person's language, ethnic background, or religious beliefs have nothing to do, whatsoever, with that person's ability fully to participate in the political, economic, and social life of the nation.

We have, as it were, a "one state" solution to the kind of conflicts that Will identifies. We don't try to set up borders to associate geographic areas with specific religious, linguistic, or ethnic characteristics. We allow all persons to be full participants in our national life, and we refuse to let the government ever limit or discriminate based on these ethnic, linguistic, or religious characteristics. Of course, this is just "theoretically" so (our practice has never fully reflected the principles upon which our nation is based), but rather than looking for "self determination of peoples," we need to help support people establish the genuine conditions of "self-government."

A United Nations that pursued these principles, and that helped mobilize global power to protect and advance the right of every person to associate, speak out, worship, and advance economically as he or she wished, would take away the cause of most of the wars of the past centuries, and help us avoid further centuries of similar conflicts.

That idea, not military might, is the gift that America can give to the world.