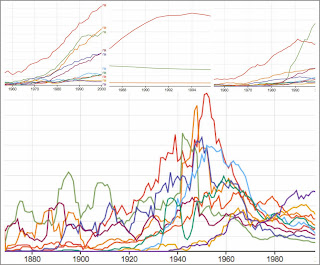 The chart above comes from an article by Ben Zimmer, published in The Atlantic. The article describes uses of the Google Ngram Viewer. The Ngram Viewer is an analytical tool developed by Google Labs. Users can employ the Ngram Viewer to receive a graphic report on the frequency with which specified words or phrases have been used in over 5.2 million books that Google has digitized. The time periods charted and displayed are determined by the person making the request for analysis.

According to Zimmer, using the Ngram Viewer is a "glorious time suck for professional and amateur researchers alike." Here is a link to the Viewer, so you, too, can start using it to waste time.

Erez Aiden and Jean-Baptiste Michel must surely be placed in the "professional" category of Ngram Viewer users, since they have recently authored a book completely based on use of the Ngram Viewer analytical tool. Their book is called Uncharted: Big Data as a Lens on Human Culture. The book has been recently reviewed in the San Francisco Chronicle by John Wilwol. Wilwol quotes Aiden and Michel as saying that the Ngram Viewer is an "extremely nerdy form of heroin."

In essence, Uncharted suggests that we can learn about the world (as it has changed over time) by paying attention to the words that have been used during the time periods in which we are interested. That seems right to me. There is, however, another important point to be made. The Wilwol review was titled "World of words," and this is an accurate description of the world we actually inhabit. The human world is a world we create ourselves, and we do create that world with words.

The Ngram Viewer looks backwards, to see what we have done, over time. This is an observer's perspective. As actors, we must look ahead, and we can actually talk ourselves into a new reality.

In fact, that is just how we do it!