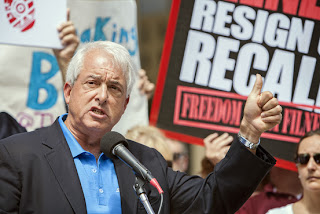 The Wall Street Journal has turned its attention to the "Neighborhood Government" movement that I mentioned back in November of last year. In a news article that appeared in its Friday, December 27, 2013 edition, The Journal reported that the Neighborhood Legislature Reform Act has now been cleared by the Secretary of State for signature gathering. The initiative is the brainchild of John H. Cox, pictured. He is an attorney, a real estate executive, and a former Presidential candidate (Republican). To summarize the initiative Cox proposes: "instead of 120 legislators, voters would elect nearly 12,000."

According to the Journal's reporting, California Common Cause has declined to take a position on this proposed ballot measure. Assembly Speaker John Perez and Senate President pro Tem Darrell Steinberg have also declined to comment.

Not afraid to speak out on this "more government" plan was Corey Cook, a political science professor at the University of San Francisco. He said the plan would "make governing a nightmare," and that it was "a recipe for nothing ever getting passed ever."