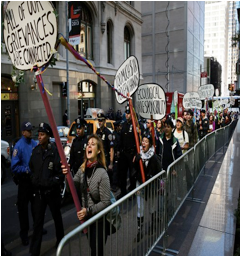 Robert Reich is now Chancellor's Professor of Public Policy at the University of California at Berkeley. He previously served as Secretary of Labor under President Bill Clinton.

Reich writes regularly on economics, social justice, and other political topics. Recently, in an article that he wrote in City Watch, Reich gave three reasons that we don't have a revolution in America:
Items #1 and #2 feature "fear" as the driver. Fear comes from believing that you face the world and its adversities alone and individually. Its corrosive effects are visible everywhere we look, and fear is linked, inevitably, to an individuality that separates us, rather than unites us.

In Item #3, Reich suggests that a large proportion of the public has lost faith in one of the primary antidotes to the fear that stems from our perception that we are alone, to wit, our ability to join together in a democratic government that works for us collectively.

The antidote to isolating, acidic fear is collective action. That probably means "taking a beating," as Hamden Rice puts it.

The results are revolutionary.