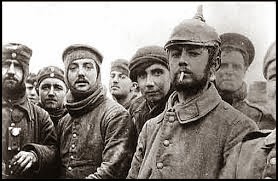 Over the holidays I got behind on my reading (among other things). It was just a day or two ago that I was finally able to take a look at a promotional copy of the December 27, 2013 edition of The Week. I gather that this is a new magazine that is supposed to give you all the news you need in just forty-five minutes of reading.

The Week appeared unbidden in my mailbox, and I did take a look at it. The thing I liked best was a brief article on "The Christmas Truce," that amazing event during World War I in which the troops from both Germany and Britain left the trenches and shared food, sang Christmas carols, and told jokes together. There weren't any orders to do so; they simply stopped killing one another, and from a brief beginning in just one location, the soldiers on both sides essentially "declared peace" all along the Western Front.

You can read the article in The Week by clicking this link, and there is more about The Christmas Truce in a "Today in History" blog, published on December 25, 2013.

The Christmas Truce didn't last long, as we all know. The fact that it occurred at all, however, demonstrates the ability of human beings ("ordinary" human beings) to do something unexpected and "new" and to change the course of history.

We usually have to know we can do something before we will be willing to try.

We don't have to go on killing one another.