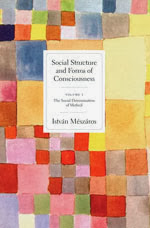 The Badlands Journal provides news of particular relevance to California's Central Valley. I subscribe to the email bulletins published by the Badlands Journal, and that is where I found the following quotation, in an article titled "California Democrats and the environment in a drought year."

The basic point of the article was to note the problems with Governor Brown's proposed "Twin Tunnels," which would take water from the watersheds of Northern California, and then transport it in large pipes, under the Sacramento-San Joaquin Delta, for delivery to agricultural users in the Central Valley. Here's the quote:

The perverse destructive logic of an all-embracing social organic system, bent on ultimately destroying nature itself as the necessary ground of human existence, implicates not only some of its parts but all of them, and thereby the system itself as a whole... – Istvan Meszaros, Social Structure and Forms of Consciousness, V. 1, (2010) p. 341.

Istvan Meszaros is a Hungarian Marxist philosopher, and is Professor Emeritus at the University of Sussex. Meszaros has been called the "leading Marxian philosopher of our day." The book referred to in the quotation is pictured above. I guess I have found another book for my reading list!

In terms of what Meszaros says, it's pretty much the point I continually try to make here in this Two Worlds blog. Human beings don't seem to be paying attention to the fact that the world we create is totally dependent on the World of Nature, upon which all life ultimately depends. The World of Nature is "the necessary ground of human existence," as Meszaros says.

You don't have to be a Marxist to figure that out.