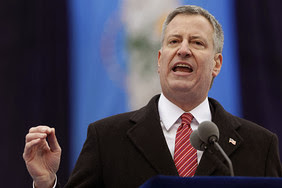 Peggy Noonan, a former speechwriter for President Reagan, and now a columnist for The Wall Street Journal, is no fan of Bill de Blasio, the recently-elected Mayor of New York City. Noonan called de Blasio a "former Sandinista" on the CBS news show Face The Nation, and she didn't mean it as a compliment. She also rapidly withdrew the statement, when challenged, since it was certainly not accurate. I am inclined to think, however, that Noonan would not back down from the assertions she made in her January 4th-5th Wall Street Journal column, in which she named Mayor de Blasio "New York's Divider in Chief."

According to Noonan, elected officials can "choose, as a leader, to be a uniter or a divider." She sees de Blasio as one of the "divider" types, and says that his inaugural address lacked "a kind of civic courtesy or grace."

I didn't listen to the speech, so I can't comment on its "tone," which is a focus of the Noonan criticism. What I do know about politics, however, is that the whole purpose of democratic elections is to "divide" the public, through their voting, and to find out which side of the division has the majority. Pretending that you can "represent everyone" is the biggest lie in politics. Ronald Reagan, for instance, may have tried to portray himself as representing "everyone" (and, in fact, he fooled quite a few people), but actions speak louder than words, as the old saying goes.

Reagan was a "divider," too; he was just on a different side from de Blasio.

At root, Noonan's criticism of de Blasio seems to be that de Blasio has been willing to say, candidly, and in public, what he will try to do as Mayor. He has made it clear that there are different interests in the City, and that he is going to try to represent the "less wealthy."

Those in the "less wealthy," 99% category aren't the main constituency of The Wall Street Journal, but there was just an election in New York City, and de Blasio is clearly representing the majority. You might even say that he has "united" them in an effort to change the direction of City policy.

That's not such a bad thing, in my mind! My best wishes to Mayor de Blasio, and to the voters of New York City, who just gave Mayor de Blasio a substantial majority vote.