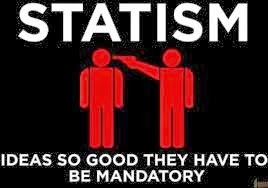 David Brooks has put his finger on something important in one of his recent columns, which was entitled "The Legitimacy Problem" in the print edition I read:

For our government to be considered credible, as Brooks points out, we must believe that our government is "competent." If we don't, the "coercion" inevitably involved in government will breed resentment and resistance. The Affordable Care Act, or "Obamacare," is Brooks' case in point.

While I agree with the point Brooks makes, I have a slightly different take on the problem. Our system is supposed to be one of "self-government." Genuine self-government tends to mitigate the "coercion" factor, since the "coercion" is self-imposed. When we impose burdens and difficulties upon ourselves (an exercise regimen or a diet are examples from the realm of our life as individuals), we do not feel that we are suffering under any external compulsion (as we would if we were being starved by someone else, or forced into hard labor).

The same thing is true with respect to our collective or community life. When we pass a school bond, or enact a law by a public vote, we don't sense the kind of "statism" illustrated above. Even if such enactments are not liked or approved by everyone, the fact that the majority has endorsed them, after a community discussion and debate, provides such governmental actions with the "legitimacy" that Brooks is addressing in his column.

Our problem with government today, in my opinion, is largely related to the fact that "self-government" is not a phrase that reflects the actual facts, in most cases. We can't have "self-government" unless we, ourselves, are directly involved. That means that significant numbers of us have to make politics a priority. When you think about it, that does not describe our current situation.

Unless the people take over politics, we are doomed to the kind of "statism" that is, in fact, "coercion," and that leads to incompetence.

Coercion and incompetence are words that describe our government in an increasing number of cases. And no one in his or her right mind is going to "trust" a government like that.

As for solutions, no one else is going to save us. We are going to have to solve our self-government problem ourselves.

That's easier said than done, I know, but we are going to have to do it!