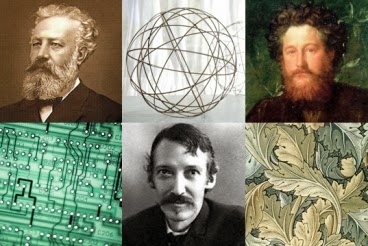 The image above is from an online interview with Rosalind Williams, who has recently published a book called The Triumph of the Human Empire. The book was reviewed in The Wall Street Journal, which is how I became aware of it.

Williams' book is based on an examination of the writings of Jules Verne, William Morris, and Robert Louis Stevenson, all writers who explored "utopian" and "science fiction" themes. The title of the book, says Williams, was borrowed from Francis Bacon, and specifically from Bacon's The New Atlantis, "a tale with utopian overtones that [Bacon] wrote in the early 1600s." Williams goes on to say that Bacon "doesn't mean empire in the sense of controlling land. He imagines it as the vast expansion of human knowledge and power. In Bacon's view, and in the view of many since him, this is the goal of humanity."

I tracked down the actual words used by Bacon in The New Atlantis, thanks to an essay by R. W. Serjeantson, found online:

The End of our Foundation is the knowledge of Causes, and secret motions of things; and the enlarging of the bounds of Human Empire, to the effecting of all things possible.

If the review of her book is accurate, Williams believes that the three authors she examines regarded the expansion of the "Human Empire" with "deep misgivings." If they did have misgivings, could this not be because they sensed that the pursuit of the "Human Empire" was, in fact, and contrary to what Williams suggests, an empire that does "control land," and even more. The vast expansion of human knowledge and power has been used, since the time of Bacon, to assert human dominion over the land, the sea, and the air - the entirety of the Earth, the entirety of the World of Nature.

In fact, the "Human Empire," fueled by the knowledge of "causes and secret motions of things," is nothing more than the construction of a "human world," in which, as Bacon predicts, "all things [are] possible."

All things are possible inside the human world, the world we build ourselves. But all things are not possible within the World of Nature. "Deep misgivings" are totally appropriate when we think that humans may not correctly appreciate the radical dependence of "our" world, and the "Human Empire," on the World of Nature, which is not under our human dominion, however much we may assert that it is.

From Bacon's insights in the 17th Century till now, the "Human Empire" has been expanding. It is a wonder to see what we have done. Williams, for instance, mentions the construction of the undersea telegraph cables constructed in the late 19th Century as having touched the lives of Verne, Morris, and Stevenson. I remember though, the telegraph message sent in 1844, between Baltimore and Washington, D.C.: "What hath God wrought?" That wording places "dominion" in a different place.

A "Human Empire" that makes war on the World of Nature is an Empire doomed to fall.