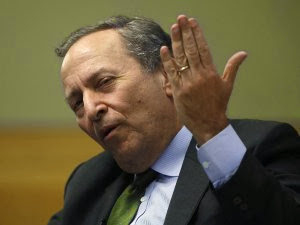 Pictured is Larry Summers, an American economist, and reportedly President Obama's original pick to head the Federal Reserve Board. On November 8th, Summers gave a speech in which he suggested that persistent conditions of economic stagnation ("secular stagnation") might be the "new normal" for the United States.

Paul Krugman, who won the Nobel Prize in economics in 2008, and who not only teaches at Princeton, but also "teaches" more generally, as a columnist for The New York Times, more or less agreed with Summers in a column published on November 17th.

Let's not be too amazed at Summers' prediction. The idea of infinite growth (the "old normal" expectation for our economy) is plainly not possible, or even desirable. That is particularly true if the "growth" that occurs in our economy comes at the cost of destroying the fundamental integrity of the World of Nature, which supports our economy and everything else.

"Expectations" can be dangerous, and can breed both resentment and disappointment if they are not realized, which is almost inevitable if they are unrealistic. We all need to start celebrating, not decrying, an economy that can function in a "steady state" mode, or even one that is based on ratcheting down (not up) the ceaseless consumption that has been driving our economy for decades.