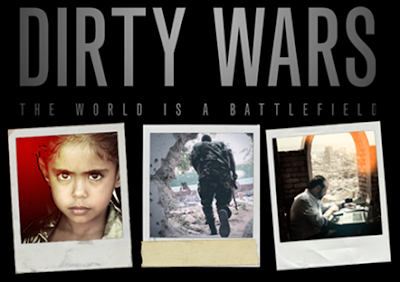 I am reading Jeremy Scahill's book, Dirty Wars. I am looking forward to the movie. On page 172 of the book, I found the following statement by Scott Horton, a human rights lawyer:

Now ... it's not unusual for the military to have commandos who, in a theater of war, will seek out enemy command and control, with the purpose of identifying them and then killing them. ... And that would be traditional, authorized warfare. ... What's different here, is that suddenly the theater of war has become the entire globe - it's become everywhere. And they're looking at the possibility of assassinating people in Hamburg, Germany, in Norway, in Italy, as well as in Morocco, Jordan, Senegal, Turkey, Yemen, the Philippines and places in the African Horn. And I'd say, in terms of law - it's pretty plainly illegal once you're outside of the normal theater of war.

Scahill goes on to quote Donald Rumsfeld, Secretary of "Defense" under President George W. Bush: "the entire world is the 'battlespace.'"

Scahill subtitles his book "The world is a battlefield."

Whether it is drones that put us there, or the techniques of American-applied torture promoted by Rumsfeld, and documented by Scahill, I am not comforted.

If the world is a battlefield, I am a target.