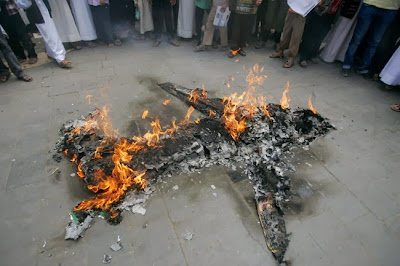 My courses at UCSC are coming to an end. In one of them, Introduction to the Legal Process, I had the students read an article about drone warfare, published in The Atlantic, and available online: The Killing Machines: How To Think About Drones. The article illuminates the changing nature of "war," as American technology pushes to innovate. Traditional concepts of war envision armies meeting on a battlefield, somewhere, and fighting. In the midst of such a fight, each side uses whatever weapons it can, to kill those on the other side, but each side puts itself in mutual danger of death as a part of this process.

In drone "warfare," a person sitting in a comfortable office in Washington, D.C. exterminates a family by remote control. Those killed never see it coming, and there is certainly no way for them to fight back. As for the guy in the office building, no danger there!

Supposedly, America's innovative move to drone warfare is a a way to minimize loss of life, but if the use of drones to execute people is justified by its relationship to a "war" (a "war on terror," presumably), it seems obvious that the only way for the other side to be engaged in the war, too, is for that side to find ways to kill their opponents (Americans) by stealth and without warning. Hence: the Boston Marathon massacre.

This is what "drone warfare" means to me: the Boston Marathon massacre.

Maybe we should think again. 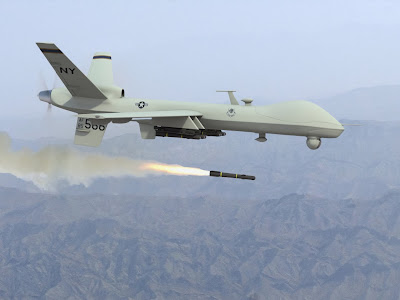 Postscript: In searching for an image to accompany this post, I happened on an article by Robert Wright, written in April 2013. He makes pretty much the same point, though from a different perspective, and his article is worth reading.