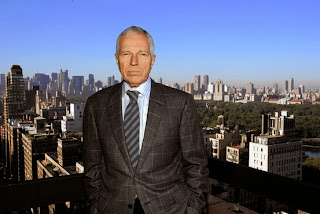 Pictured is Edmund Phelps, winner of the 2006 Nobel Prize for economics. I just read a review of his recent book, Mass Flourishing. According to the review (I haven't read the book itself), Dr. Phelps "sees modern capitalism as profoundly humanist." In justifying this "humanist" label for Phelps, the reviewer cites to Phelps' claim that modern capitalism is "imbued with a spirit that views the prospect of unanticipated consequences that may come with voyaging into the unknown as a valued part of experience and not a drawback."

I guess that "voyaging into the unknown" without worrying too much about the consequences is what the reviewer defines as "humanism." And maybe that is Dr. Phelps' view, too, for all I know. In other words, this "profoundly humanist" modern capitalism roundly rejects the "Precautionary Principle." This kind of capitalism is "humanist" in that it assumes that what humans do is all that really counts. My "Two Worlds" theory gets kicked to the curb, at least as I am understanding things.

Naturally, I don't agree. Any "humanism" that doesn't place human conduct within the "two world" perspective is missing out on a realistic understanding of who we actually are, and where we are. Global warming and the toxic contamination of our oceans, and of our bodies, are just the latest in a long series of "consequences" the possibility of which we should have thought about before we initiated our "voyaging into the unknown."

Furthermore, not only does a "humanism" that excludes a concern about our place within the Natural World put us all in great peril, a "humanism" that defines a human being as an "individual," and strips away any understanding that we are "human" only insofar as we are connected to others, is a "humanism" that will allow (and even applaud) a situation in which the rich step on the bodies of the dying poor, as the rich travel to their society functions.

I have been teaching my "Law and Social Issues" class at UCSC about Roosevelt's "Four Freedoms," and about how President Roosevelt was able to convince the American people, facing the greatest economic disaster in the history of the nation, that our government has a responsibility to make sure that its citizens have "Freedom From Want."

According to Phelps' reviewer, Roosevelt's efforts to ensure that our society would achieve "Freedom From Want," for everyone, represents "corporatism." And in his view, "corporatism" is at least as bad as "socialism."

America's most obvious peacetime foray into corporatism came during the Great Depression, with the National Recovery Administration, whose administrator, retired Gen. Hugh Johnson, tried to set prices, mandate minimum wages and maximum workweeks and save America from "the murderous doctrine of savage and wolfish competition and rugged individualism." From their graves, America's Founders reached out and saved the country from this enormous overreach of executive authority...

Luckily, I think, the Supreme Court decisions that overturned the early regulatory efforts of the New Deal (the defeat of which the reviewer applauds) were themselves discarded by the Court in subsequent years. The Supreme Court has ultimately decided that the government can, in fact, set minimum wages and provide for a maximum workweek, and can carry out similar programs to provide protection for workers and citizens in general. This kind of "corporatism" doesn't violate what the Framers of the Constitution intended, either!

"Humanist," properly defined, can never describe a system that assumes that "humans" are not, ultimately, creatures as well as creators, and that humans are not, ultimately, subject to the laws that govern the Natural World into which all humans are born. Neither can any system be called "humanist" that ignores our human connection to one another, and that suggests that there is no "corporate" responsibility; that we are all just "individuals."

Any understanding of the world that rejects these truths about who we are, as humans, and that presumes to call itself "humanist," is a "humanism" that is profoundly misdefined.