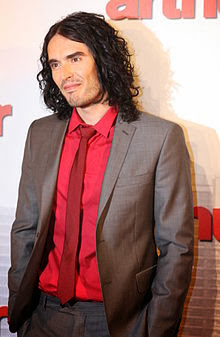 British movie star and stand-up comic Russell Brand has become a spokesperson for revolution. Brand has announced this new role by guest editing an issue of the New Statesman. The New Statesman is a current affairs magazine published in Britain, and Brand has devoted his edition of the magazine to the topic of revolution.

Brand's video "pitch" to potential readers is quite entertaining, but the topic is a serious one for him. A more substantive and lengthy presentation of Brand's thoughts, in text not video form, can be accessed by clicking this link.

I first became aware of the Russell Brand - Revolution connection when I happened upon another video, in which Brand confronts Jeremy Paxman, a British talk show host. That video, like Brand's "advertisement" video, is quite entertaining, but the tone is different. It is not light hearted. Brand displays a slashing rhetoric that takes no prisoners, and his denunciation of the political class is right up there with Bob Dylan's characterization in "Pay In Blood."

Another politician pumping out the piss.

Brand's message is quite simple: our current political system is of, by, and for the corporations and the wealthy, and it doesn't deserve any respect. Failure to participate doesn't come from any "apathy" on the part of the non-voting public; it comes from the apathy of the political class that isn't even trying to solve the real problems of real people.

I have to say, Brand's analysis seems right on target to me. And from such understandings revolutions do come.

Watch the video! Read the article! Get ready!